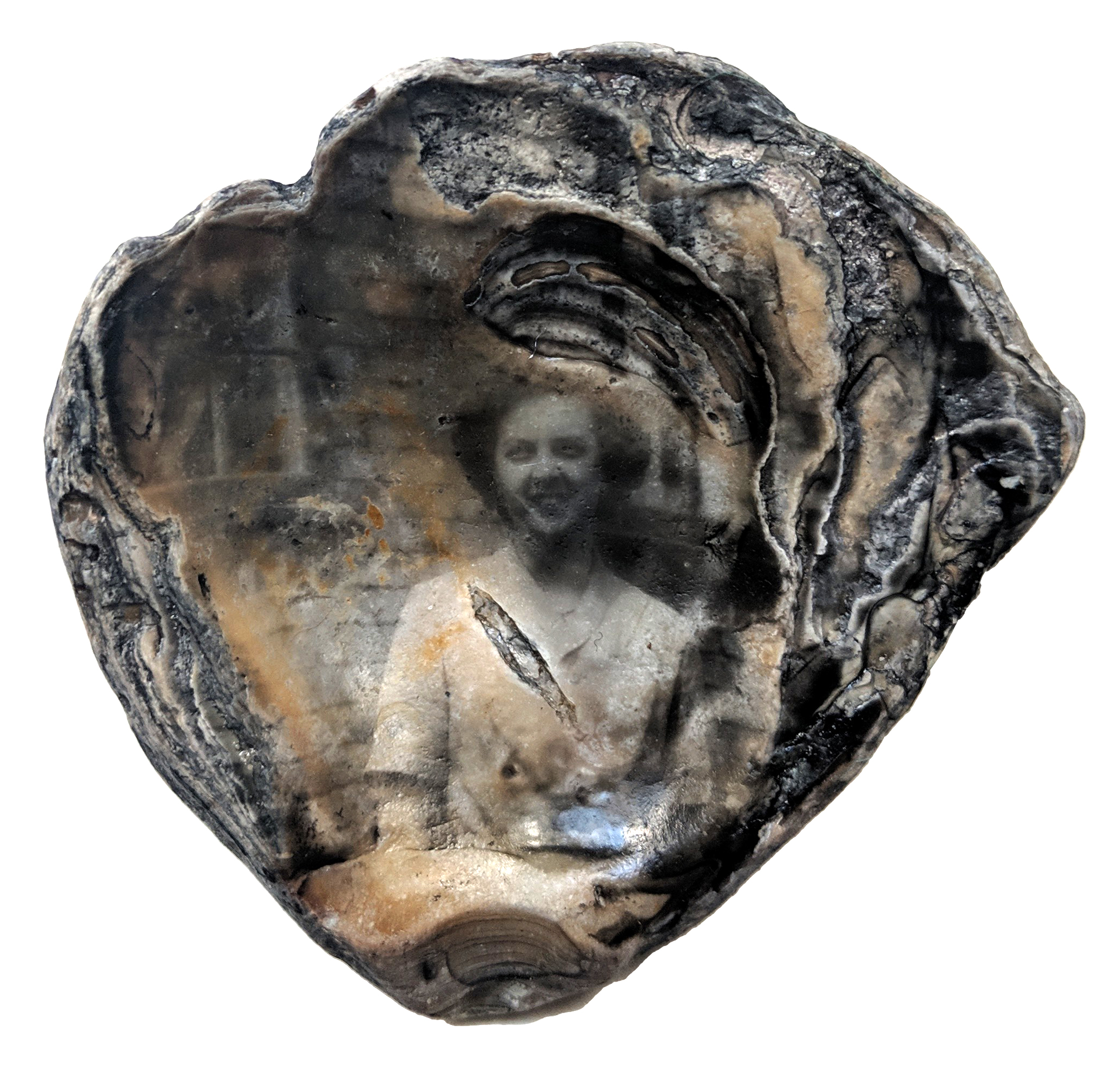 Shutter Hub member Tina Rowe is interested in mark making – the deliberate placing of form on a plane through gesture, through printing, moving something from one space to another. Tina uses the tools of analogue photography to make marks, literally and figuratively. Tina does not see this as in any way different to someone with a drawing practice who chooses to use something more (for want of a better word) traditional, such as graphite or charcoal, ink or paint. When you deliberately make a mark, it’s still a mark. The reasons as to why she makes the marks are what matters.

Here we’ve invited Tina to share with us more about her practice and her ‘Oyster Shell Ghosts’ body of work. 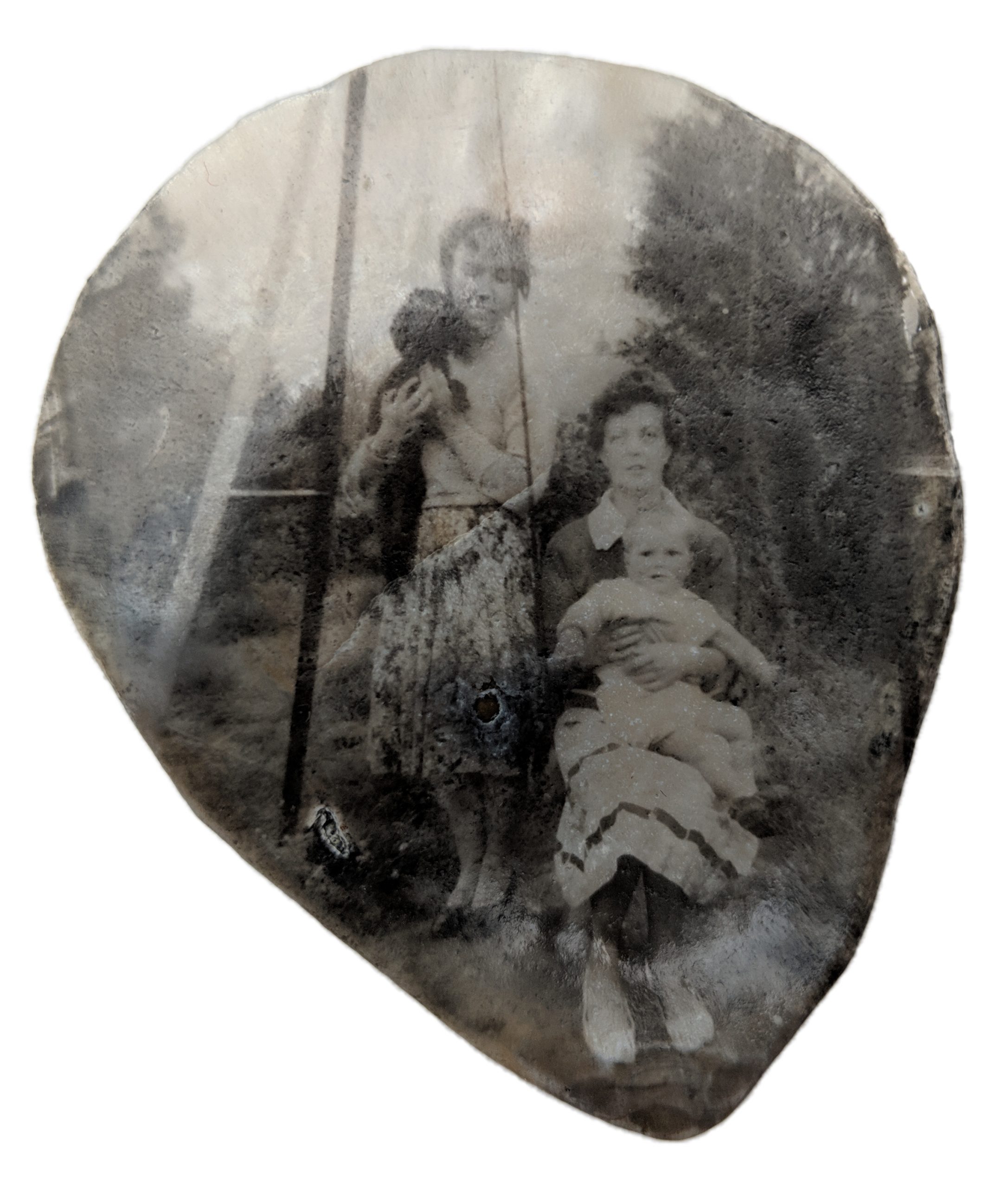 I started off intending to draw but a few things got in the way and I exchanged the pencil for the camera. In my practice photography part of a range of tools, sometimes a starting point, but never as a thing in itself. I’m drawn to process and construction of images because in my head at least, the constructed image is just more interesting. Basically I’m saying I’m not a photographer. Which doesn’t mean I am not interested in photography. I am a proud founder member of e5process, an artist run darkroom in east London. It’s a messy darkroom, it’s an experimental darkroom, it is the antithesis of just about every other darkroom I have ever been in and it makes me happier than just about any other thing in the world.

I have been working on a project about transracial adoption and portraiture for quite some time. I was doing this because I’m transracially adopted and I know what I am talking about. One of the things I was looking at was printing on unexpected surfaces as a means to talk about the weirdness of taking someone from, say Mogadishu and sending them to live in, perhaps, Malvern, in the 1970s. So I was working on looking at substrates and liquid emulsion when I was given a box of negatives that had been bought at a car boot sale. The negatives came with some documentation that included hand-written developer recipes as well as an invoice for darkroom equipment. The negatives were wrapped in little paper packs, sometimes with the dates on them. What was missing were the names of the individuals or the locations where the images had been taken. So I had a pack of negatives of people who had stood or sat in front of someone with a camera between 1947 and 1965.

These people all looked a lot like the people who inhabit the photo albums of my mother. Those albums had been quite useful in the last three years of her life when we would, now and then, sit with them and I would get her to tell me about uncle Curly (really he was called that) grandma Cope and the hoards of others who had also obediently stood in front of someone else’s camera. Now she’s gone, most of those faces are completely unmoored from the humans they had been, just like the people in the box of negatives. So I started to print them on oyster shells that I have been mudlarking (collecting items at low tide) from the Thames foreshore. 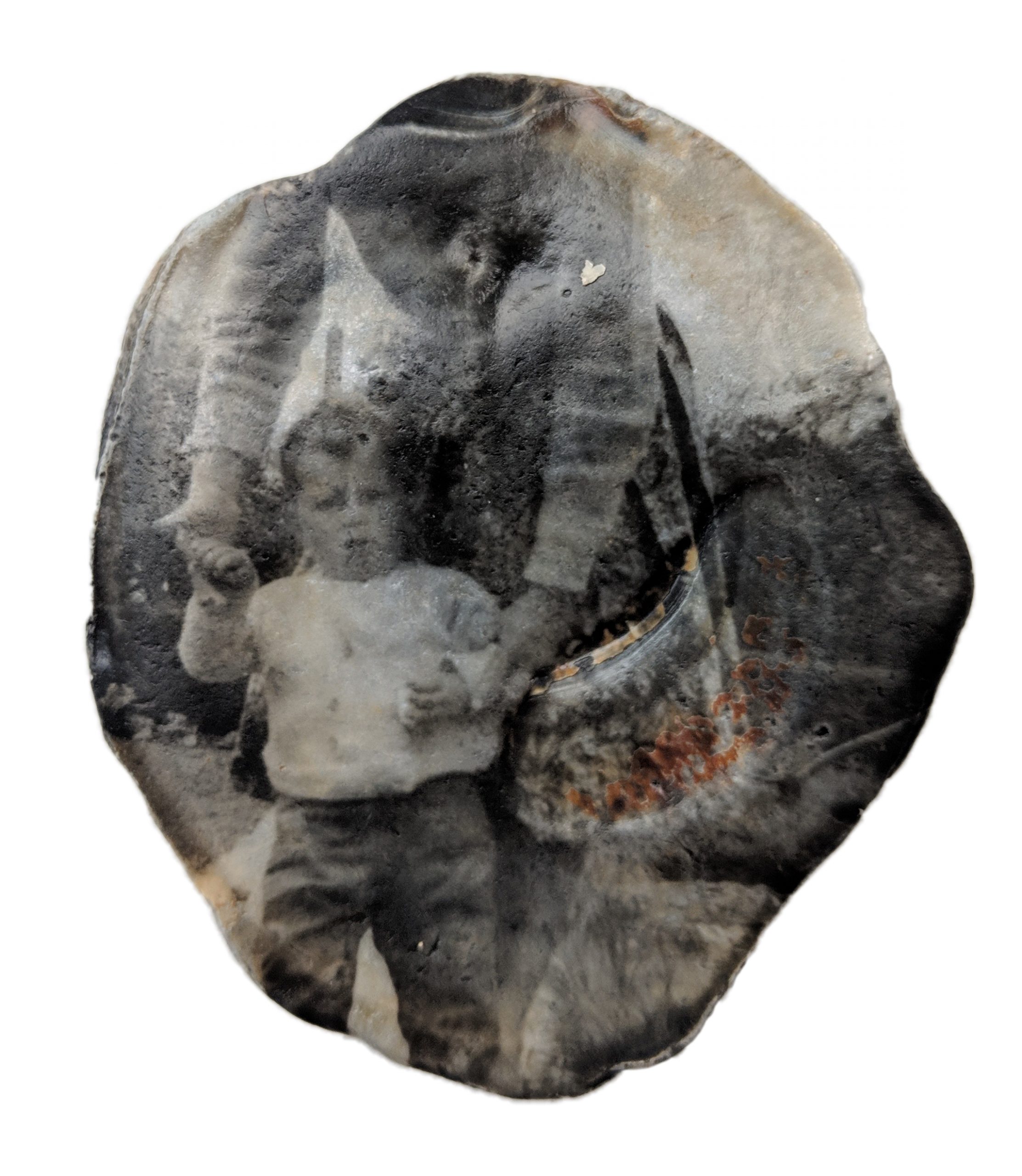 The first time I went mudlarking, I was looking for clay pipe stems. There are zillions of shards easy to pick up all along the foreshore, I knew about them from other people who collect and I wanted to use them as weights for liquid emulsion prints I was showing. What I hadn’t expected was the proliferation of oyster shells. Oysters do not grow as far up the Thames as the place I like to scavenge. They must have been bought in. So you have the hands of people who picked them, the hands that packed them, the hands that came along with the carts that carried them to the hands that sold them into the hands of the people that ate them and threw their shells into the river. Those facts are maybe the only tangible thing that still exists of each and every one of the human beings that came into contact with the shells.

That is like the negatives. As far as I’m concerned, the subjects of those negatives, glint into existence with the shutter click and then completely disappear into time. There are pictures of people in uniform, people in what appears to be new clothes, a woman with a rather lovely coat and a pair of black leather gloves, there are groups of people who could be siblings, women with what I presume are their children, a man and what appears to be his daughter. On particular image I find exceptionally strange as it is a two women, one on a swing, holding a baby and another standing next to her holding what I thought at first was a black doll but finally I realised it was a dog. Another image gradually revealed itself to me, it is of a family having what appears to be a picnic. In the center is a man in a suit, right of him are what appears to be two youngish boys, on the left are two women and a baby but strangest of all there is a car in the distance that appears like a plaque on a wall. It’s quite odd. 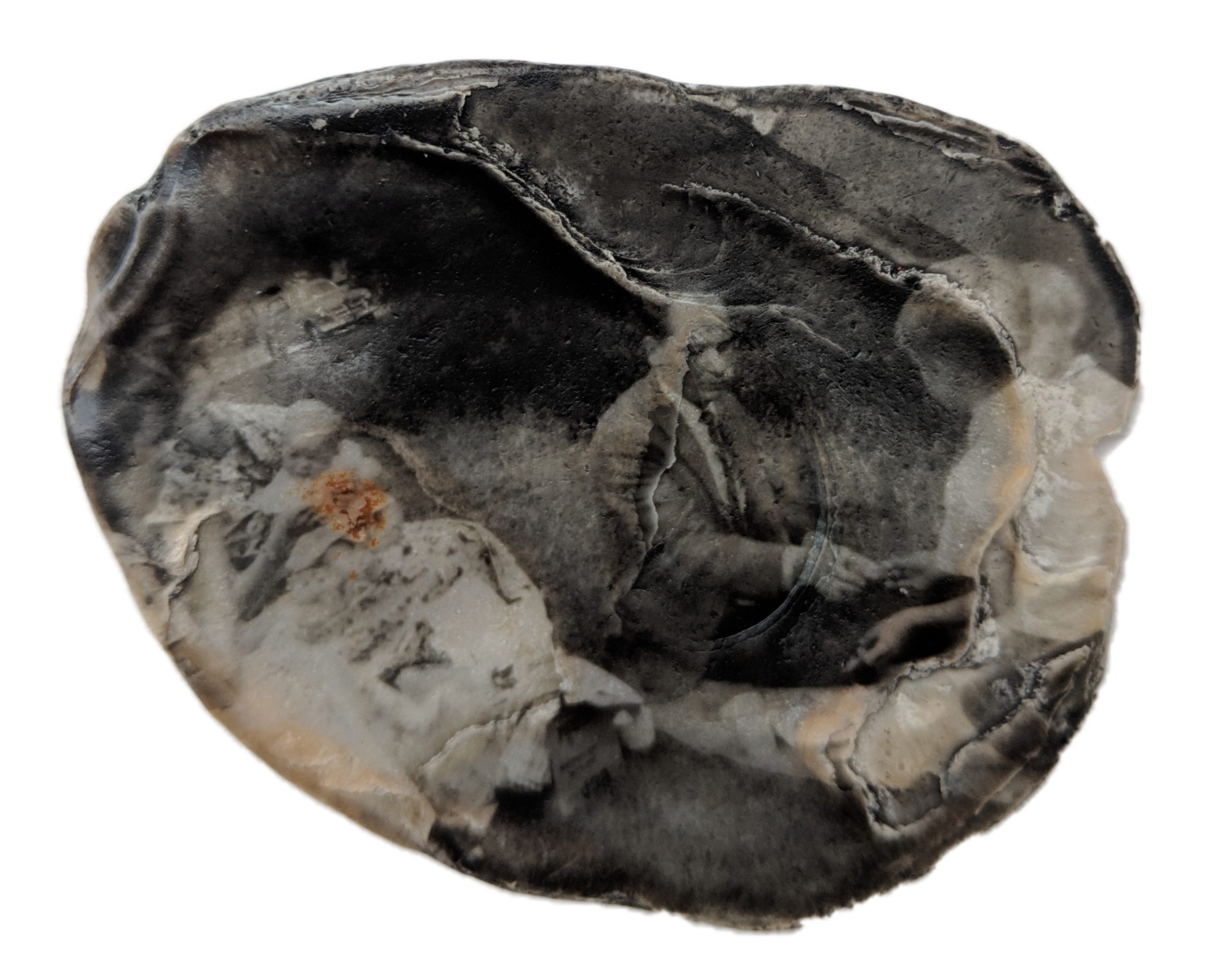 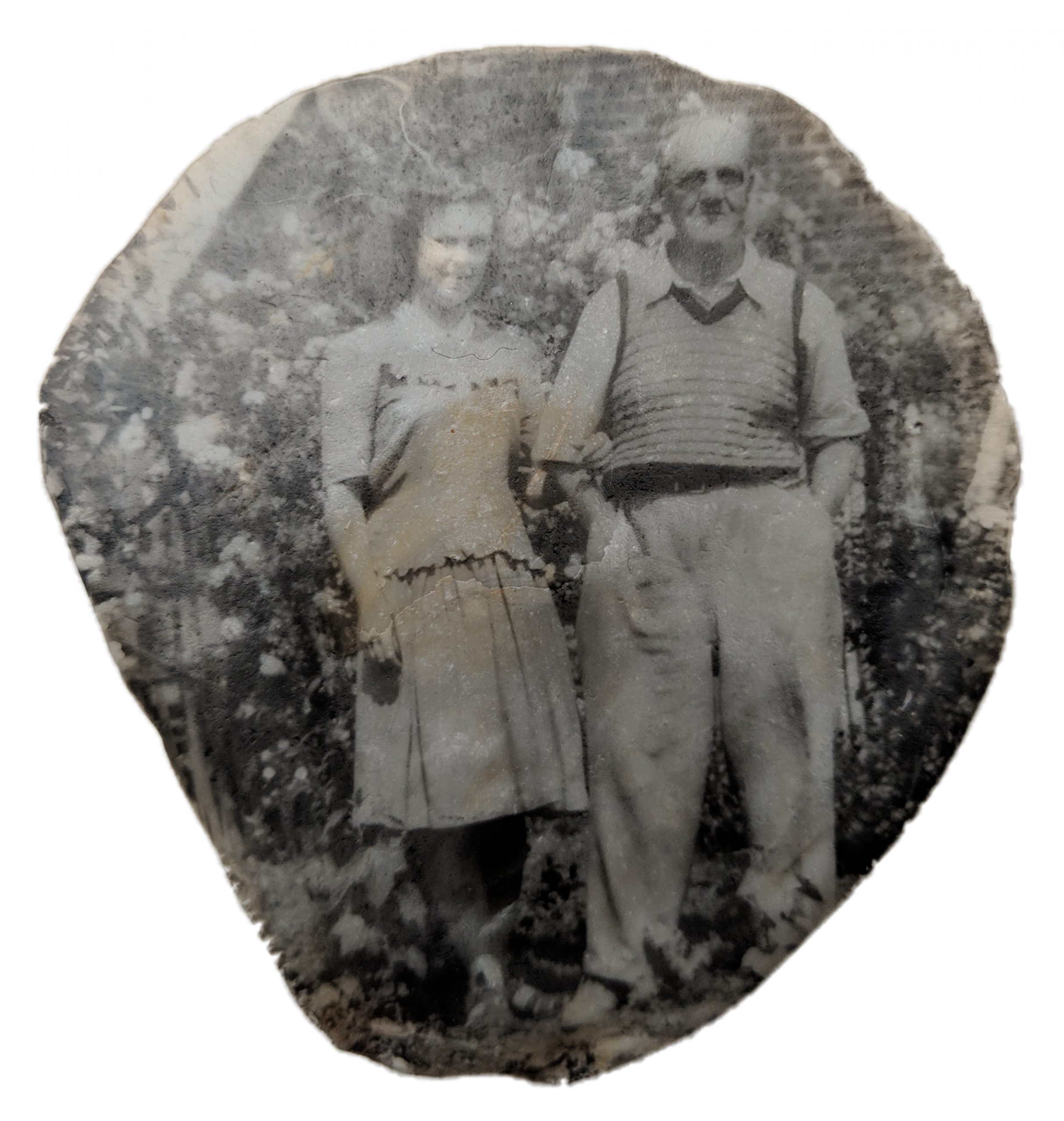 I have shown this work quite a lot this year. It is important that people pick up the shells and look at the images. I want the subjects to be observed and taken in because I feel that was the purpose of the photographs in the first place. I feel that one of the most problematic things about photography is the way it enables us to be distant from the subjects of photographs which in turn then enables us to spectate at the most horrific events so long as they are presented in the context of art; consider how often photographs of lynchings appear in books on photography and the current surge of images from the Congo of Leopold. These things nestle in and amongst discussions of other topics, except the actual topic of how each and every human in that photograph also had and existence outside that barbarism.

I wanted to make work about the domestic, the ordinary and to show how quickly that ordinary becomes extraordinary, mysterious, forgotten but not erased. One day some poor sod is going to have to make some kind of a decision about the trail of film and pixels I have left behind.

See Tina’s Shutter Hub portfolio here, to find out more about her work, and visit her website here.