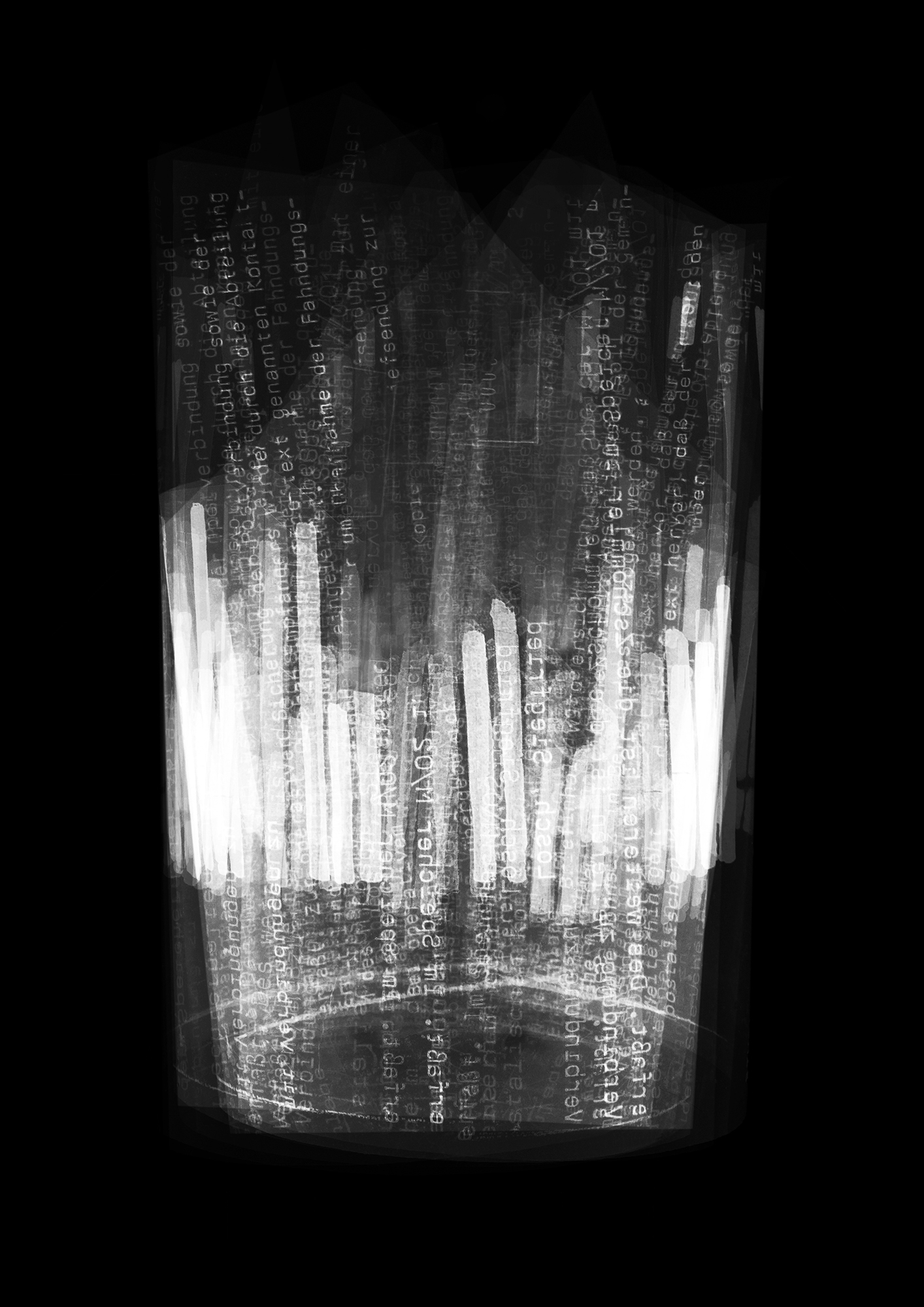 Shutter Hub member Christiane Zschommler was recently shorlisted for the Aesthetica Art Prize 2019 with her project Beyond Orwell. The project is part of a wider investigation into the records the Stasi had held on her whilst East Germany existed, and forms part of Zschommler’s recently published book, Under Surveillance.

The images are beautiful. darkly beautiful. Ghosts of letters lie over each other, scribbled, confused. Layers like memories, like the imprint of text left behind on the underneath pages of a notebook. Like microfilms stuck in the reader. Carbon paper copies, facsimiles, Gestetners. Stamps and marks, unidentified, Xrayed. The outlines of envelopes form the shapes of houses. Invaded homes, bugged, watched and trespassed upon.

We are all under surveilence, and whilst we feel we are free we don’t care so much about that, but history shows us that things can change overnight, and we should be more awake to the world.

Fascinated by this work, and proud to have exhibited some of the images in London and Amsterdam, we asked Christiane to share more with us here… 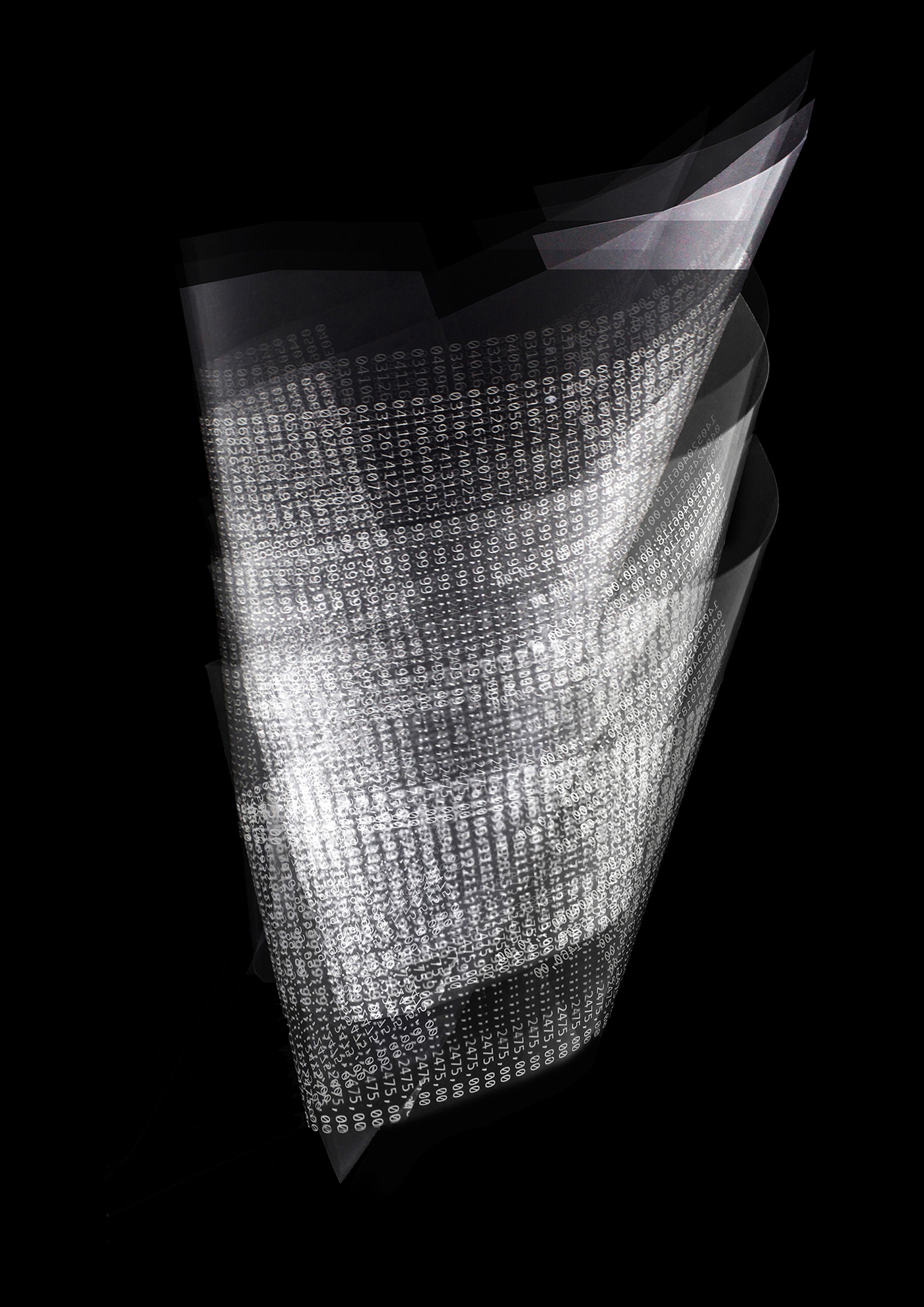 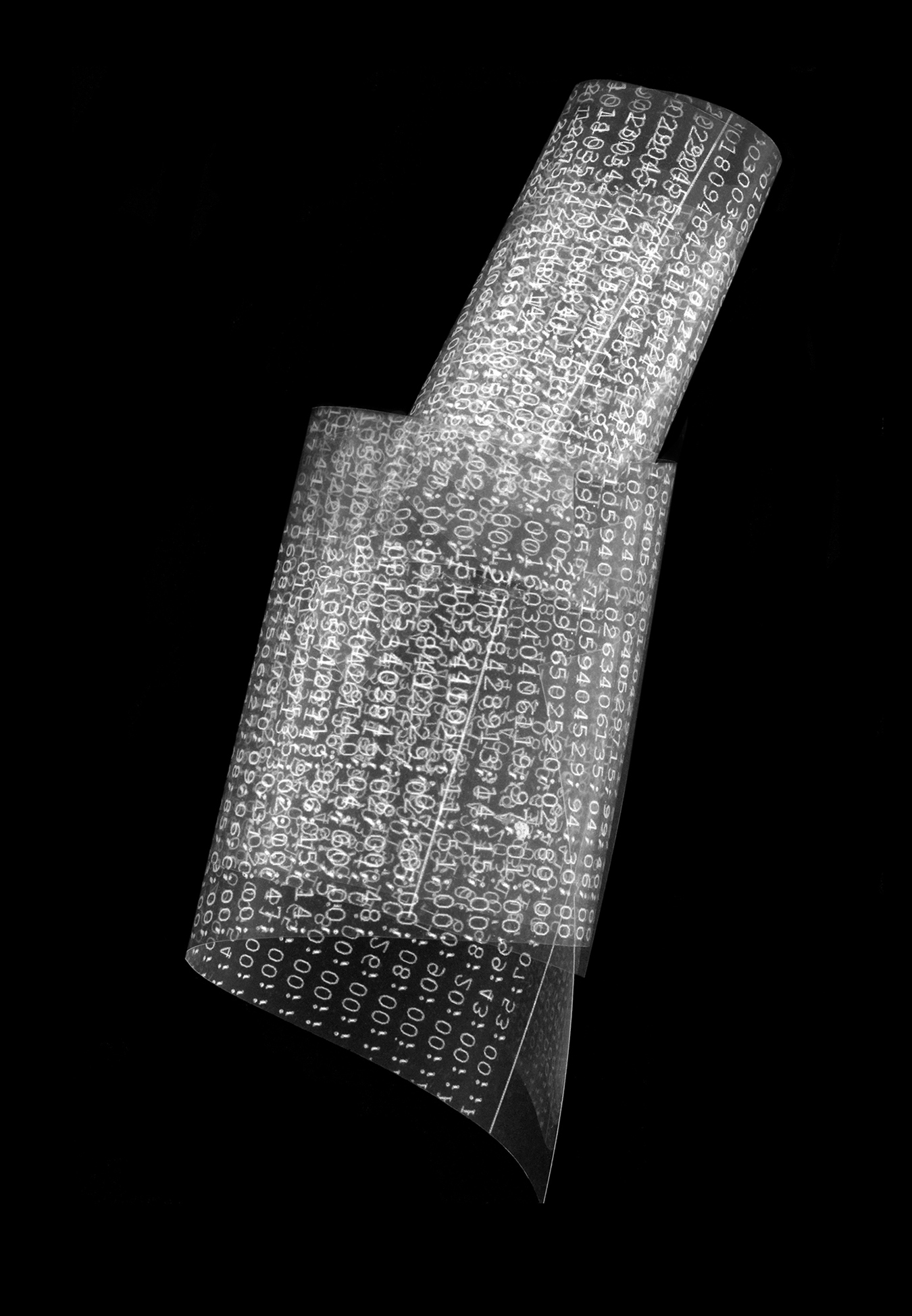 “Always eyes watching you and the voice enveloping you. Asleep or awake, indoors or out of doors, in the bath or bed – no escape. Nothing was your own except the few cubic centimetres in your skull.”  – George Orwell, 1984

Creating this new body of work concerning the brutality of life behind The Berlin Wall has made me reflect on my personal experience of living in East Germany.

Born in the 1960s, in the German Democratic Republic, my generation was brought up on one side of a divided Germany, without knowing the other. With the fall of The Berlin Wall, my roots, planted in a totalitarian system, became irrelevant.

The culture in which I was raised, and worked as a teacher, has ended up roped off, behind glass, with access by ticketed admission.

The experience of East German totalitarianism has been reduced to sets of statistics, printed on leaflets and handed out to visitors entering museums. Both the victims and the protagonists of this former political system exist now only as data: as mere facts and numbers.

But still, 30 years after the fall of the Berlin Wall, The Ministry of State Security (MfS) or ‘Stasi’ endures as a global synonym for a police state.

The Stasi operated above the law, with no respect for privacy. Besides opening personal mail, they employed a variety of different methods of surveillance, including bugging peoples’ bedrooms to blackmail them, as well as conducting home searches and leaving discreet signs of their presence so as to intimidate those being monitored.

These surveillance methods were ‘open secrets’; the Stasi knew everything about everyone, for the sole purpose of protecting East German ‘socialism’.

The agency for the safeguarding of the Stasi Records (BSTU) holds 111 kilometres of Stasi files, and in 1997 I applied to find out whether there were files held on me.

Six months later, I received a reply: a file existed. 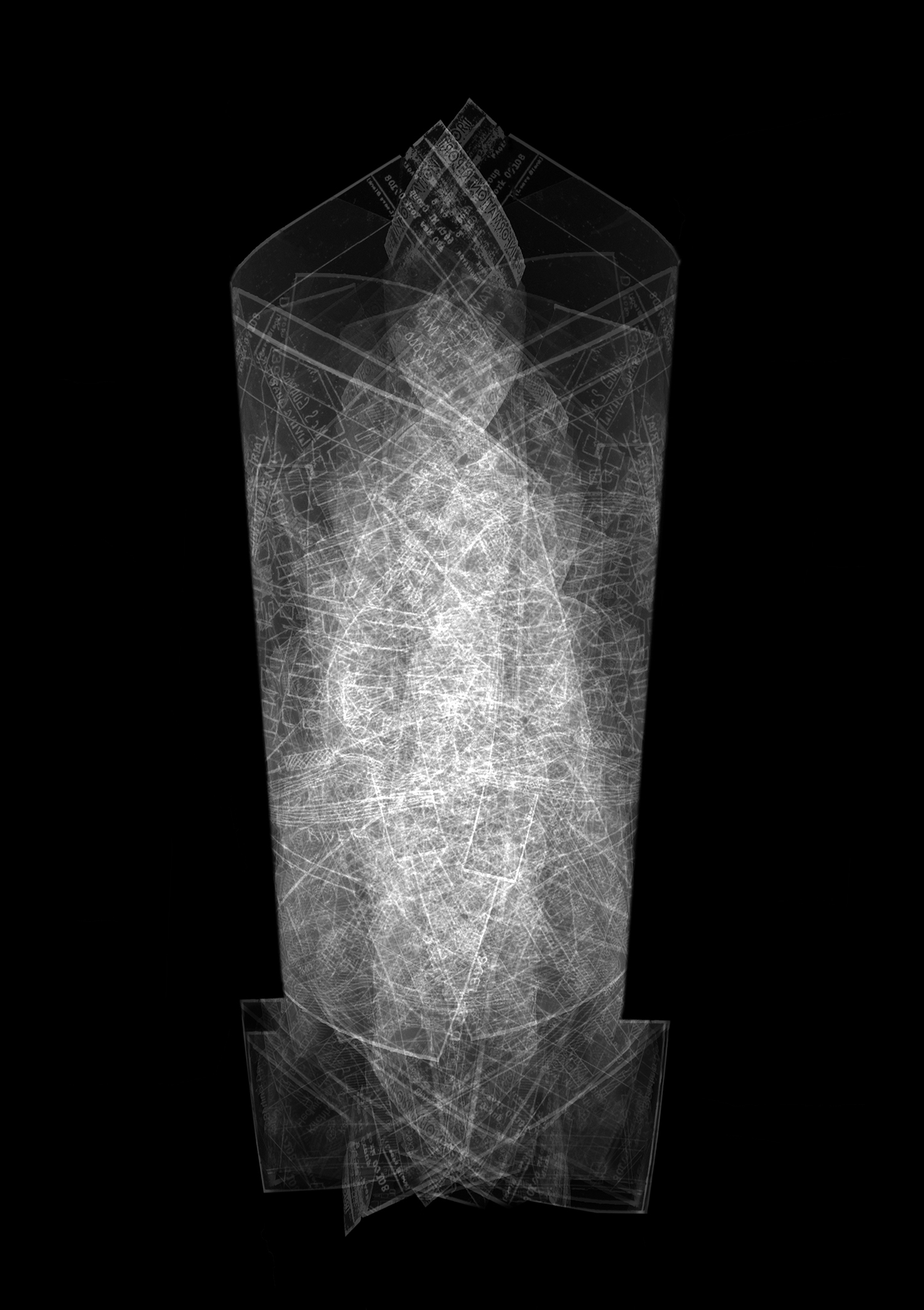 The further delay before I could read my file made me think about what it contained and about who had betrayed me. Family members? Close friends? Colleagues at work?

The file, No. 1214/87, contained meticulous photocopies of my letters to my friends and to publishers of teaching materials in West Germany; their letters to me; and index cards to record all the evidence the Stasi found while searching through my mail.

The personal communications recorded in my Stasi file even included the fronts and backs of envelopes and simple picture postcards.

We were transparent beings. 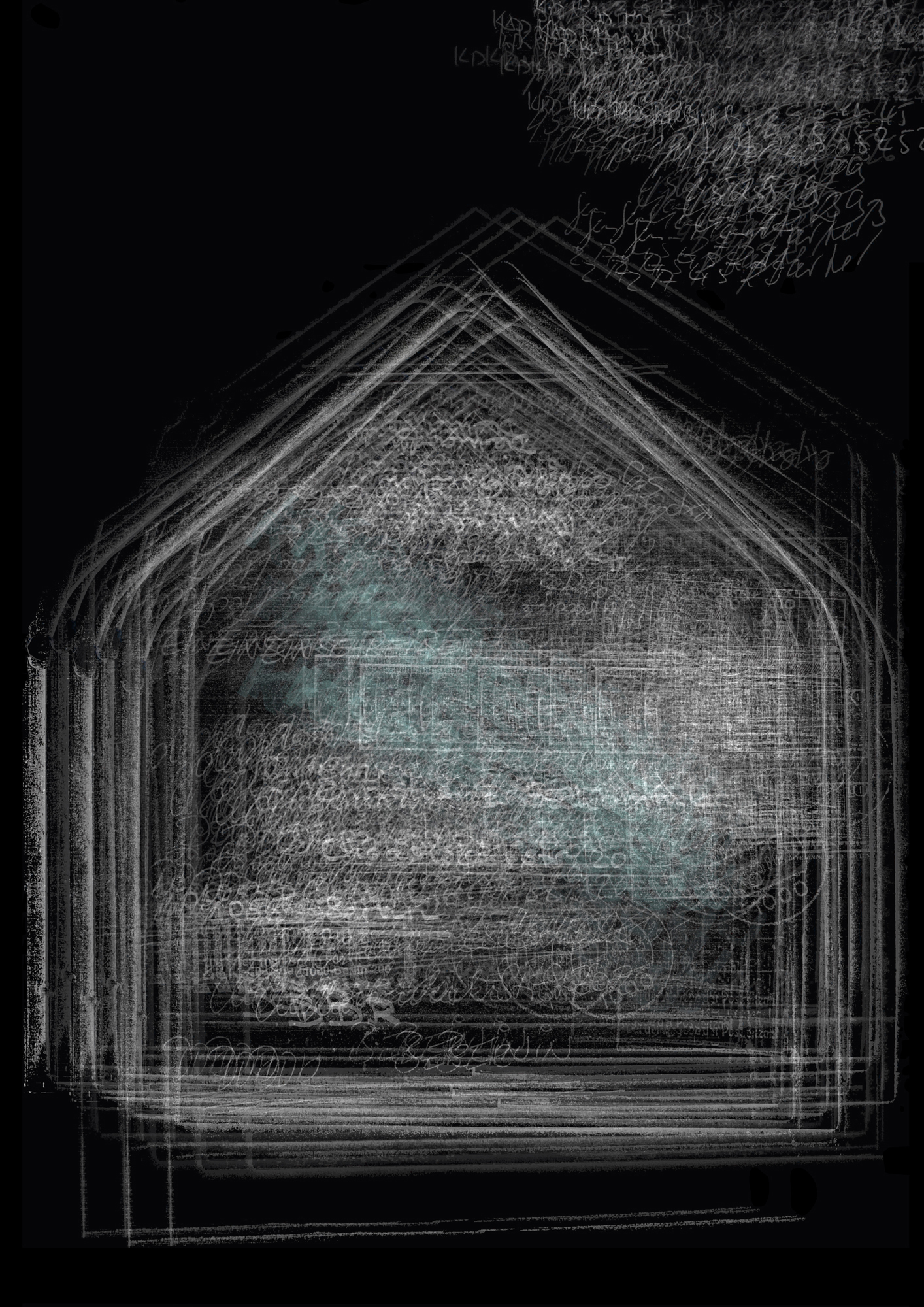 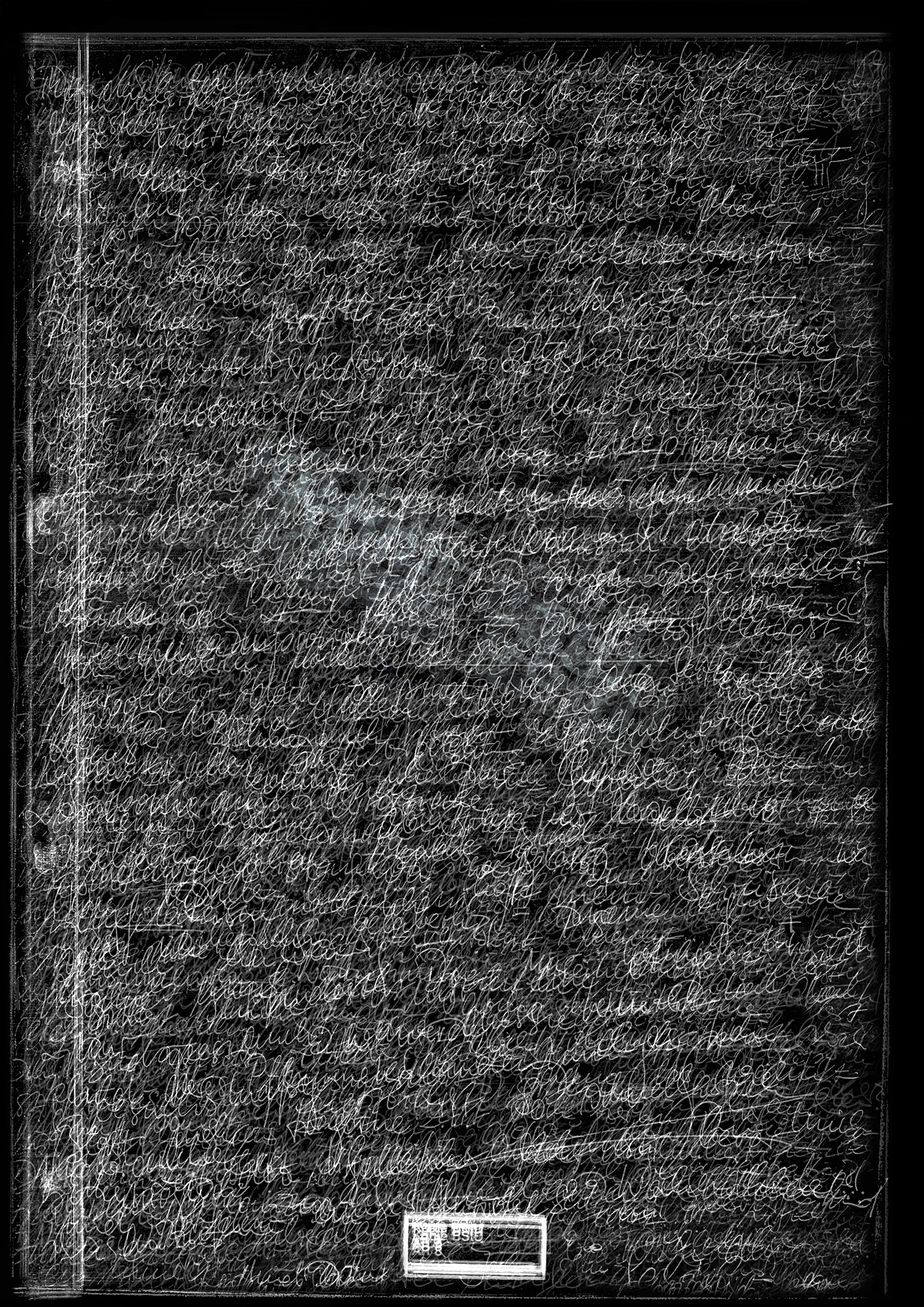 I could not believe the absurd pettiness and the sheer volume of manpower involved in collecting, checking and vetting our mail. Neither could I comprehend in what way they thought I might be conspiring to undermine the ‘socialist dream’.

The final report in my file suggested that I should be dismissed from my teaching post for being ‘unsuitable’, which resulted in my being transferred without notice.

Created from the multiple pieces of information recorded on individual pages in my file, the images in these photographic artworks have the sense of also having been placed ‘under surveillance’, but in a way that leaves their detail somewhat unclear. In some cases, new multi-layered forms and structures partially obscure the information, while still leaving some glimpses of detail. In others, all alphabetical and numerical information has been hidden under the geometric and abstract shapes that arose from the way the Stasi recorded the information. 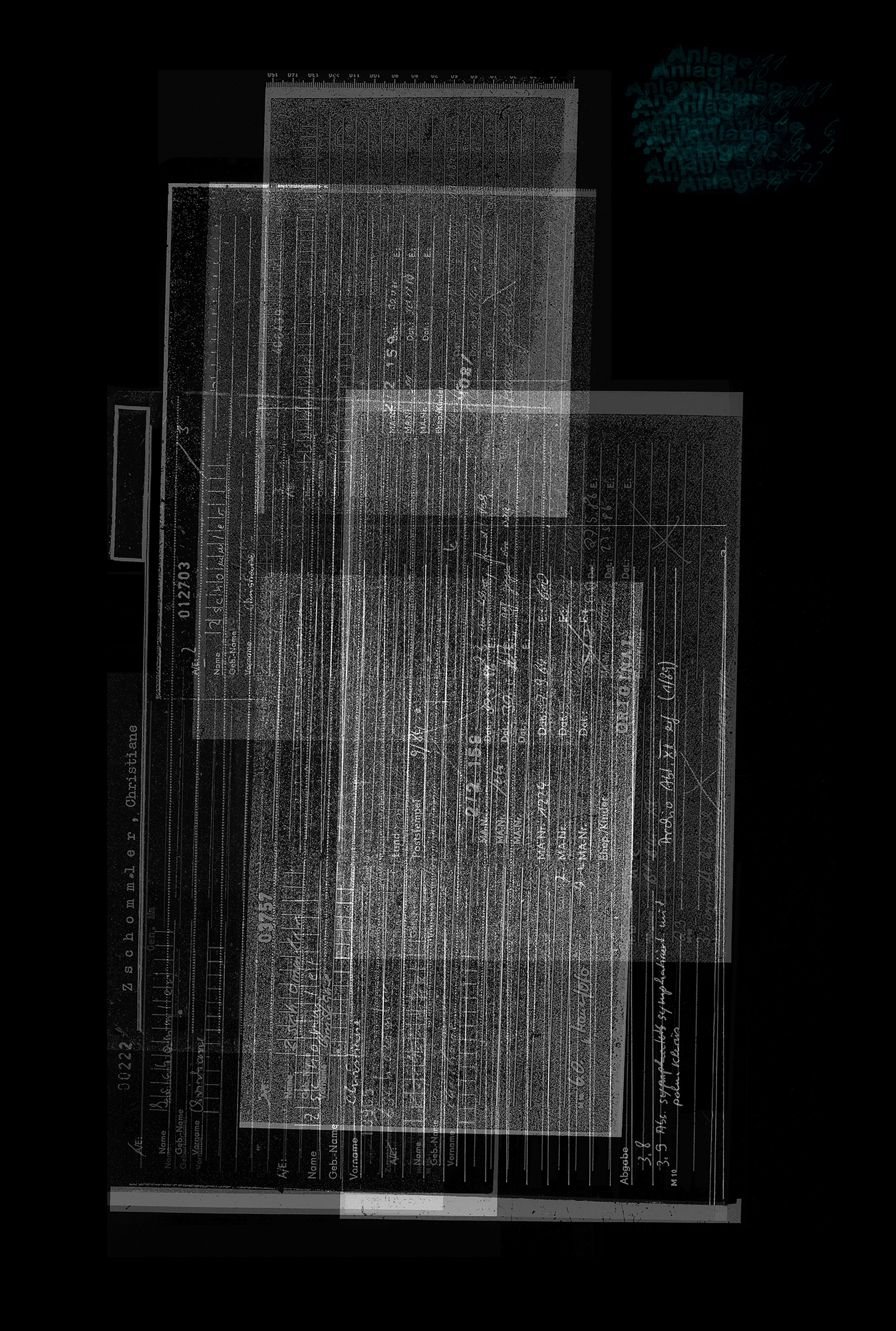 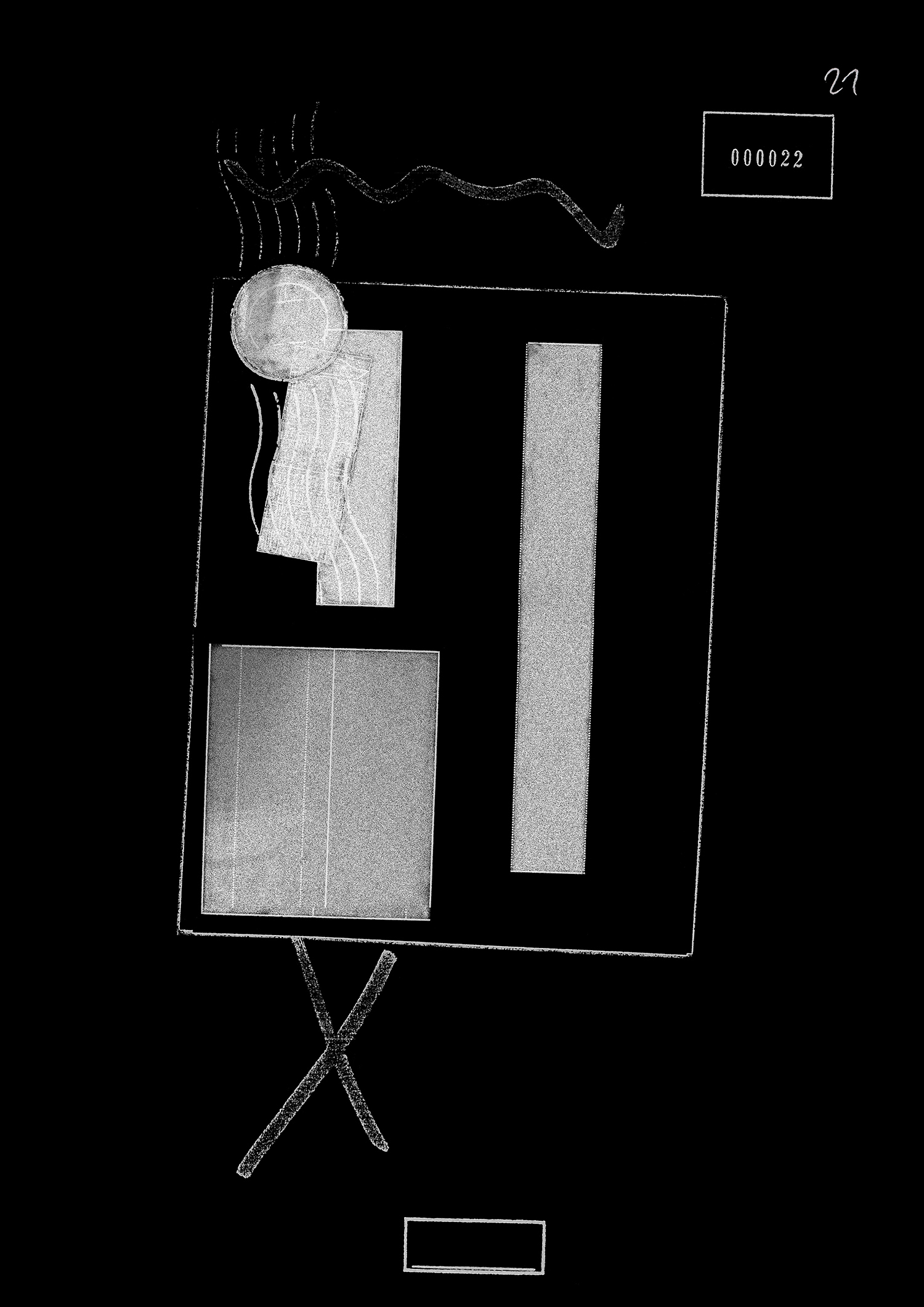 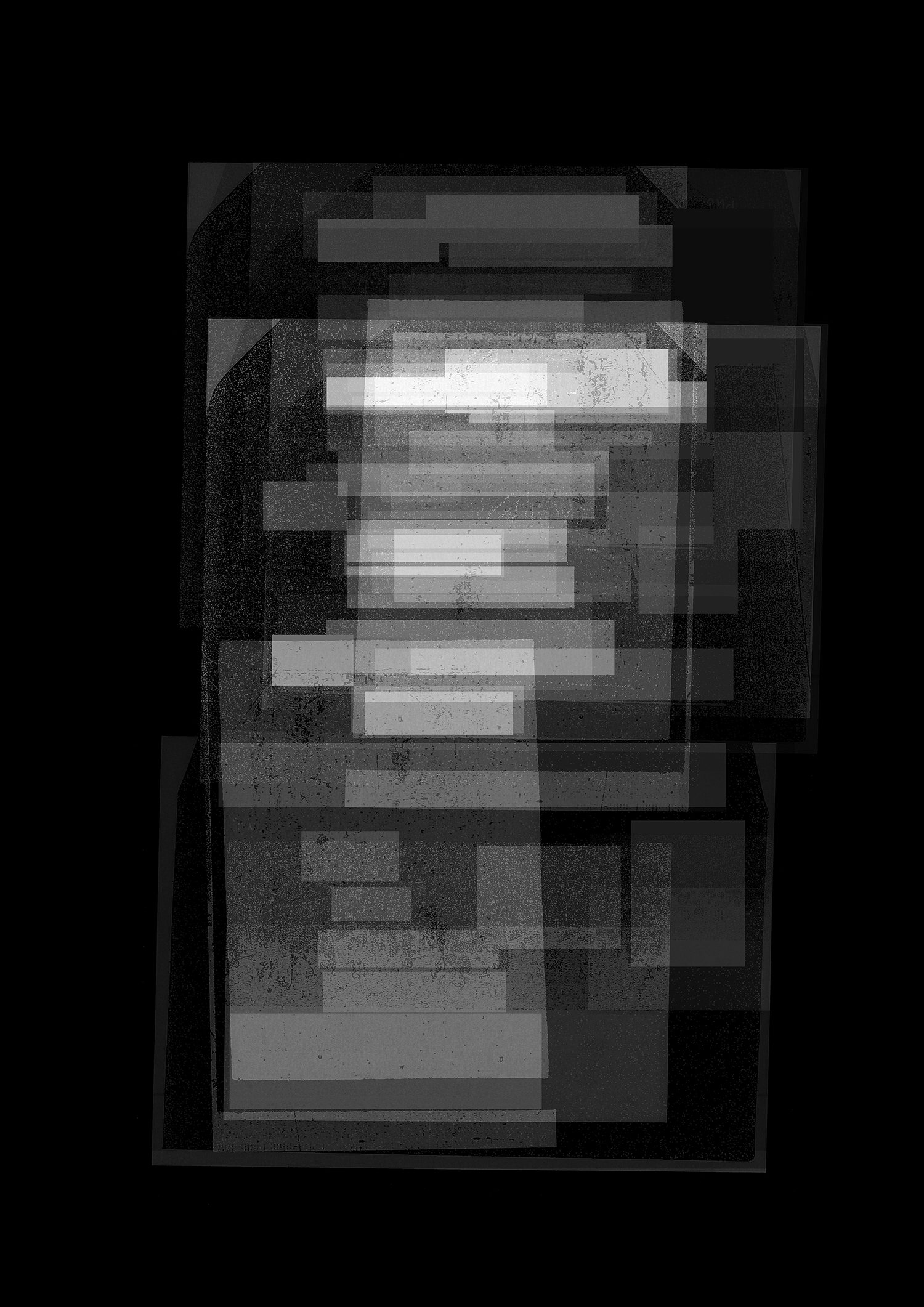 This lack of clarity echoes my own feeling at the time: my uncertainty over whether intimate information about me was being recorded and held in a secret file; my uncertainty over the extent to which this information was continually being passed to the Stasi by normal citizens.All of this led to a constant fear of arrest and interrogation without any chance of a fair trial; of being found ‘guilty’ because the Stasi said so. No East German media would have reported any of this; no family members would have been informed of my fate.

Being constantly under surveillance is very present in the world today. Across the globe, vast amounts of personal data are being tracked, captured, read and stored by governments, organisations and corporations. Spying on the private lives of citizens and the misuse of their sensitive, personal information is increasing in scale and sophistication, at an alarming rate. 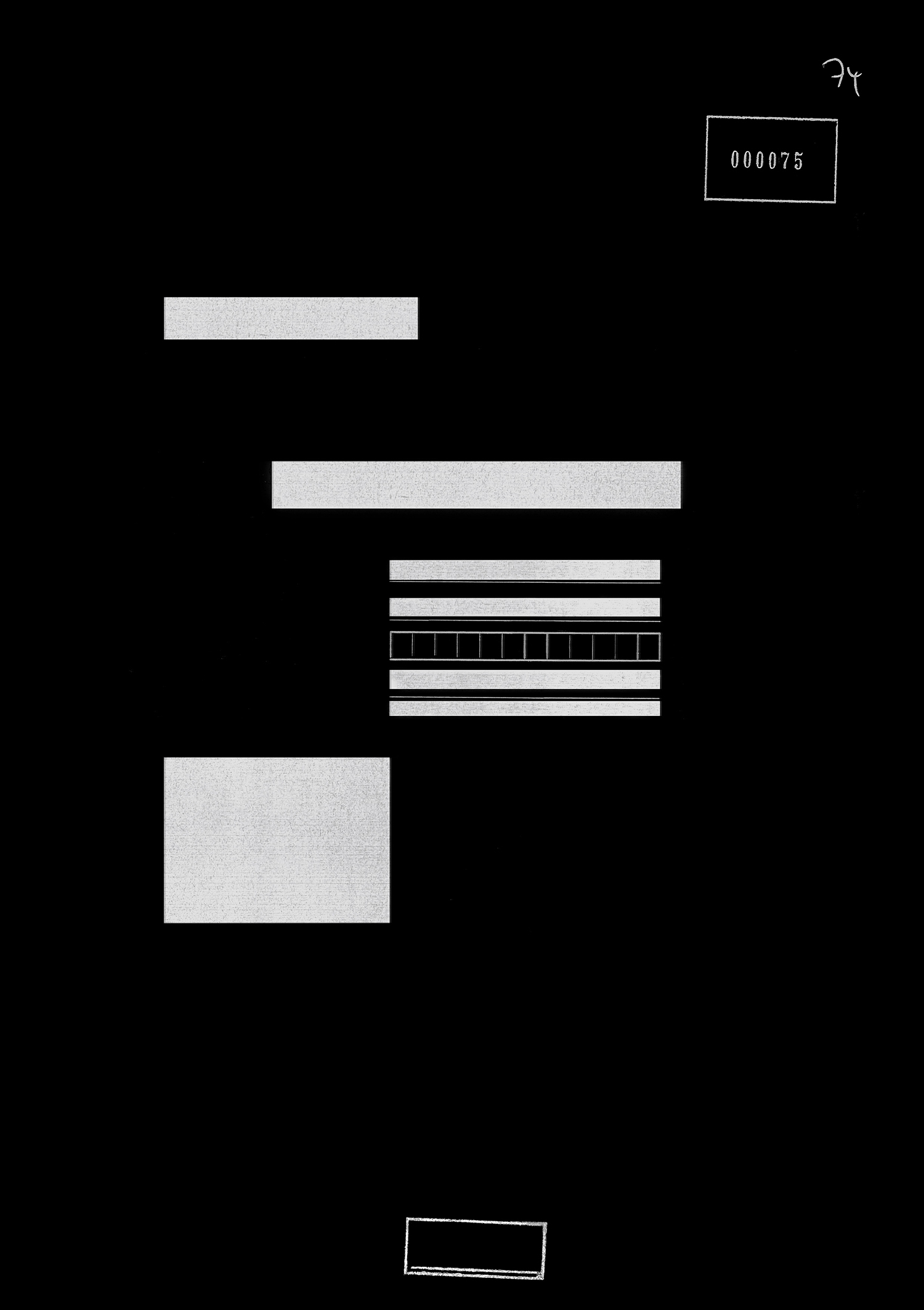 In creating ‘Under Surveillance’, I have chosen to avoid a strictly documentary approach to the material. Although this body of work clearly has anautobiographical dimension, I did not want to engage with the subject matter from a purely retrospective, purely personal point of view.My artistic intervention has been more attracted by the formal and structural aspects of the retrieved data and their development into more abstract, visual formations, creating something simple and beautiful as a counterpoint to the destructive violence of the regime under which we lived.

In doing so, I hope the photographic artworks in ‘Under Surveillance’ can be relevant to people for whom the issues of surveillance, the right to privacy and the ownership of personal identity are as important to them as they continue to be to me.

See Christiane’s Shutter Hub portfolio here, to find out more about her work, and order the book here.