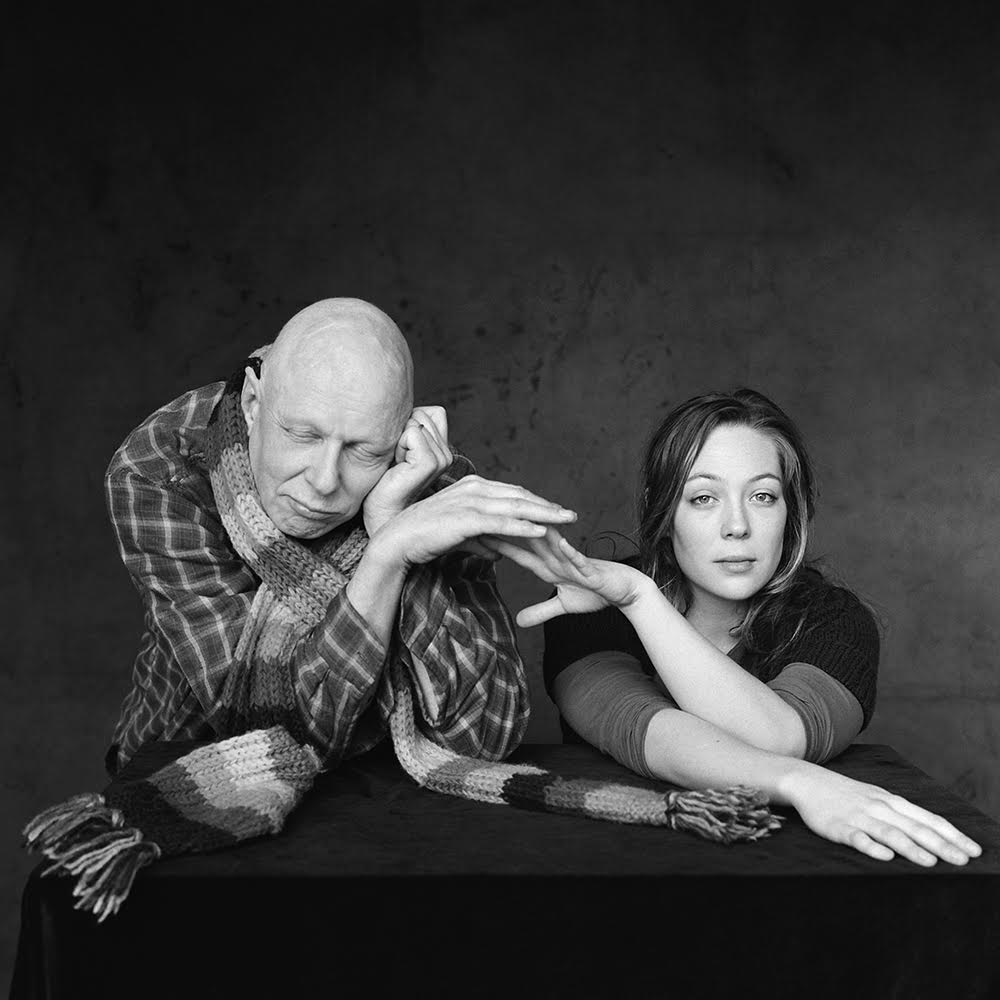 As we launch our latest exhibition, Shutter Hub OPEN 2018, at 5&33 Gallery in Amsterdam,  we talk to Clare Park, one of the exhibiting photographers.

Clare is a London based photographer who explores photographic self-image through the use of symbol and metaphor. She began developing this work whilst studying photography at the Royal College of Art, through personal narratives of her own life journey and reflections upon being a ballet dancer. Over the years much of this very personal self-portraiture has been exhibited and widely debated.

The body, movement and collaborative process form the foundation to Clare’s work. Her love of theatre and story telling is evident in the posters she has devised for companies such as the Royal Shakespeare Company and the National Theatre and also in on-going projects, in particular Breaking Form: Buz and Parkinson’s. A portrait of Buz from this series won the Gold Medal in the Royal Photographic Society’s International Print Exhibition 2010, printed by Jean Lippett, and is now part of the V&A RPS permanent collection.

We asked Clare more about her ‘Breaking Form’ project and the long-term relationships she has built while developing this work. 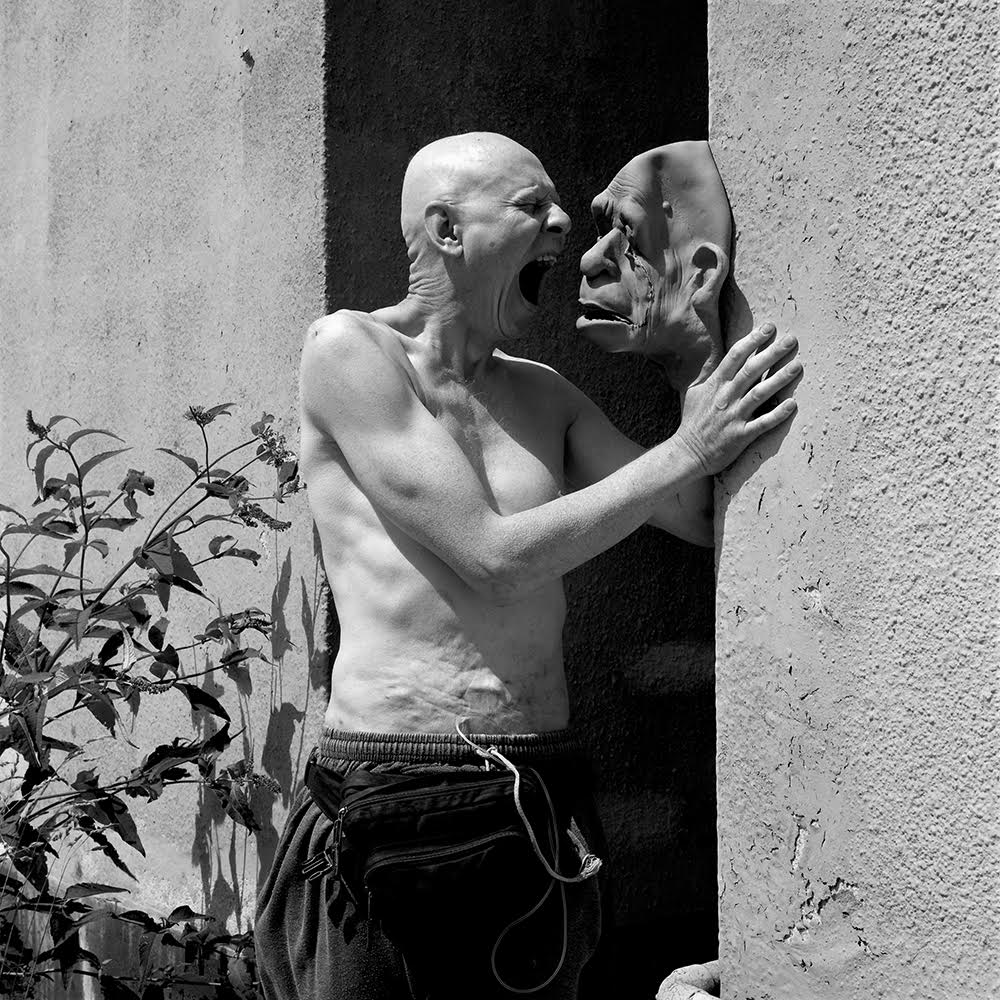 A unique collaboration developed over  two decades between myself, Buz Williams and his wife, actor movement specialist Debbie Green, resulted in the narrative photographic study Breaking Form: Buz and Parkinson’s. The imagery derived from my friendship with Debbie, and our three collaborators’ professional backgrounds in theatre, dance and movement and Buz’s illness – Parkinson’s. The pictures and words provided a context in which Buz could communicate in his inimitable style when control was diminishing in his everyday life.

“Parkinson’s was part of our family life. We travelled with its inexorable but unpredictable progression incidentally, as well as at times in its thrall. Ever on the alert, I allowed just enough time for inhabitation of the imagined world before the daily one threatened. The artistic process of conceiving the images though remained to the very last a joyful and inspirational one.” Debbie.

Buz considered me to have been a great companion on this photographic journey, supplying the footholds and guidelines needed to keep the project going forward for 20 years:

“Clare is bang on the button. I would like people to be moved by the photographs one way or another it doesn’t matter which way: stirred or amused, shocked or inspired. The pictures altogether, as an entity, could offer others the opportunity to take another look at their illness and how they might deal with it.” 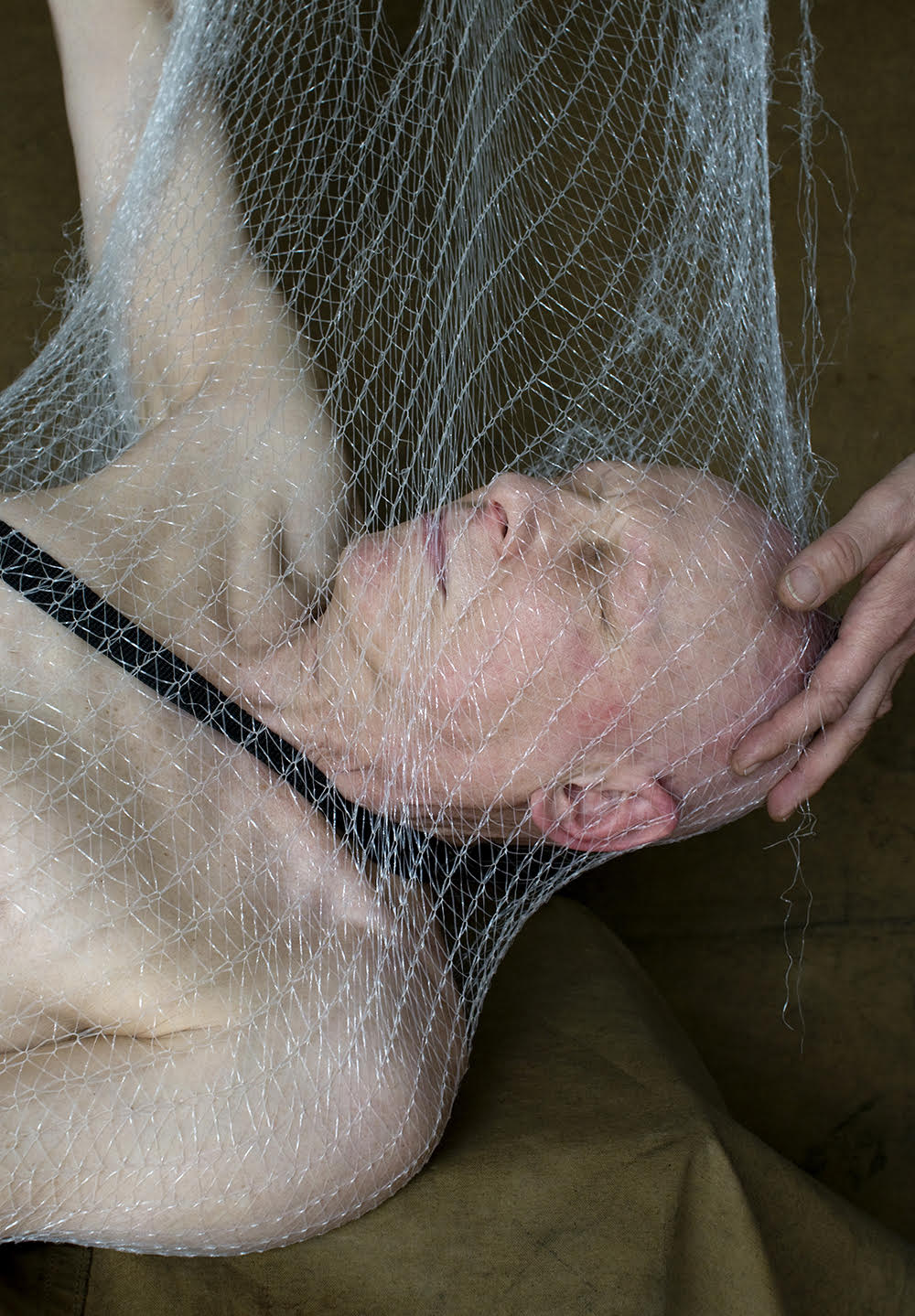 The stories were shot purely for ourselves, an expression of ourselves by ourselves and the photos remained in boxes for many years, except for key images that were photocopied for Buz as source material for his ideas and writing or simply to accompany him to hospital. Each shoot, a production put on for no other reason than to play, explore and discover within family and friendships; sharing simply with those who were present at the time.

The starting point for a new sequence of pictures may have been a garment, everyday paraphernalia or a gesture but the images often took on more than one meaning; we may have intended one thing and discovered another three, despite the increasing constraints of Parkinson’s and five children between us, or sometimes because of them.

The concept and staging were set collaboratively but it was the actualities of Parkinson’s that always dictated the outcome and resulted in a stop/start method of shooting. I became used to responding quickly in order to capture the drama from the unexpected. The challenge was to balance and convey the artistic alongside the root of the matter. Our photographs are not a documentation of the daily rituals of chronic illness, rather an expression of the universality of the human condition enhanced with details specific to Parkinson’s.

“There is a palpable and fluid collaboration flowing through these pictures, one every photographer hopes to find with their subject, but few achieve.”  ‘Opening The Box’ by Max Houghton, B+W Magazine, July 2013 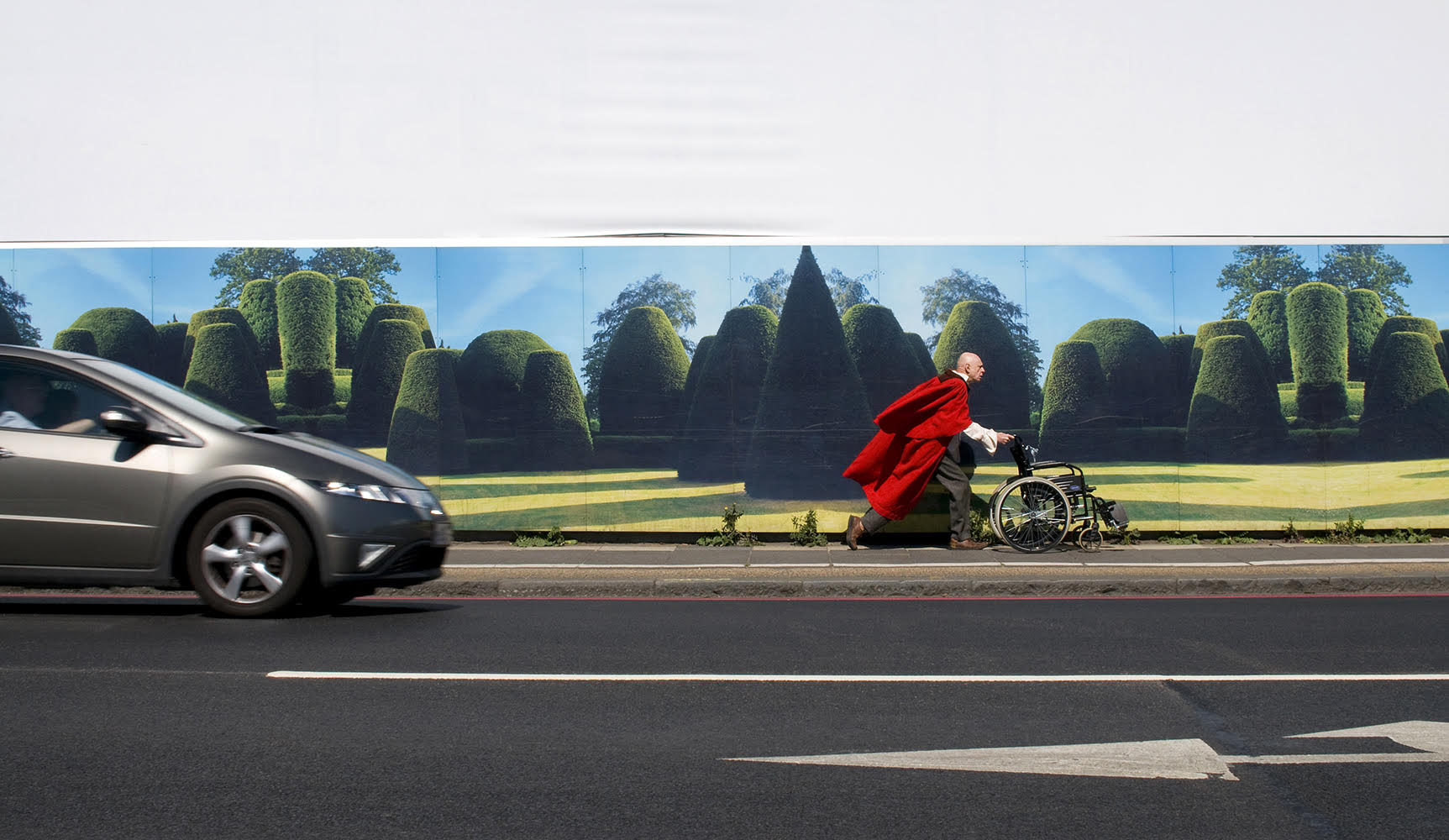 In the four years following Buz’s death in 2014, Debbie and I have continued working together to create one photograph per month. Breaking Form: Re-Formed encapsulates work started in 1993 that could no longer continue because of the loss of one of its collaborators. It emerged as an evocation of our realities – losses and frailties, curiosity and optimism – and as a final salute to the transformative spirit of Buz. We have created four series: Yellow, Friendship, Series Blue and W(h)arming. 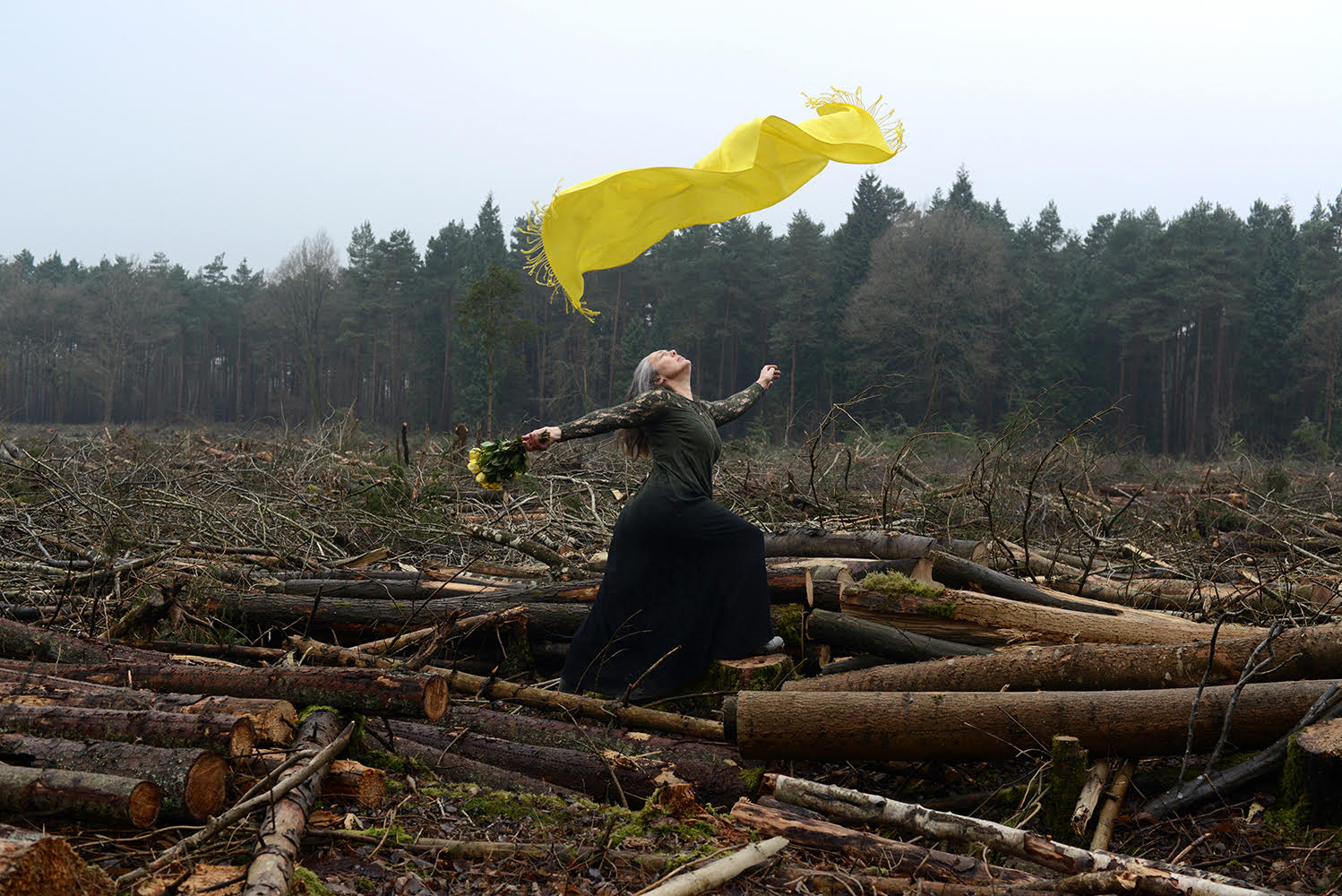 BEYOND REACH, 2015 from Yellow. © Clare Park. (Shown in Shutter Hub’s celebratory exhibition of women photographers Because We Can in the Festival Pil’ours, France.)

Each image of Debbie was shot in the ‘spirit of Buz’, through symbols personal to their lives. If asked for a choice of colour, Buz always said yellow. His slant on life was bright; what Buz brought to the table was a flexibility of mind and a sense of humour despite having endured Parkinson’s for so many years. Buz could always see beyond his illness which Debbie and I saw as a special gift and which we attempted to express each month.

In the same spirit of transformation, a study of the entire project has been made by Buz and Debbie’s daughter Matilda Williams, who is an ethnographic illustrator. She has curated the images and text from her unique position being both inside, and outside the project. The book, which will be published next year, presents a glimpse backstage, behind the lens, and behind the imagery.

We both feature in this sequence of black and white photographs about our enduring friendship and intertwined histories starting when we first met as teenagers at the Rambert School of Ballet. Each shoot was a symbiosis of combined experience and specialisms and our understanding of the body in movement and stillness. The resulting images, often shot within the constraints of the 10-second self-timer that I use for my self-portraiture, were underpinned by spoken and unspoken understanding. How even two of the images were created without us being together: one shoot, impossible because of ceaseless rain, had to happen two days later without us, and the other at a distance apart because of my incapacity.

The montages layer and weave together our personal photographs month-by-month, compressing time and space to produce a visual journal of a year in our lives. That they are blue is in contrast to Series Yellow; he chose yellow and she blue. The blue of these digital montages also references the cyanotypes made by botanist Anna Atkins in the 1840’s. Her pioneering sun prints of ferns were the inspiration for my Shadow Dress series, 2003-13. Each picture is the outcome of the high-jinks of joint creativity and a metaphorical response to how we both co-conceive the world with either one behind, and either one or both in front of the camera. The photographs often possess recurring themes and sentimental keepsakes. Debbie’s landscapes from her ‘walks with no dog’ series flow across my (self) portraiture and each picture has one element from the imagery of Buz.

This year we are metaphorically responding to our fragile world and trying to see beyond the half truths. Using a 1960’s mahogany Gandolfi 5X4 camera and degraded Polaroid Type 55 film we are creating pictures about the environment using ordinary household waste. Buz’s left over fishing tackle became the focus of one of the images: not only does it reference destruction to the natural world but also the tangle of neurological illness and the mourning of an extraordinary man, Debbie’s husband.

“The very creation of each image is an act of love whatever emotion it is depicting.” Len Salem, treasurer of London Independent Photography, 2018 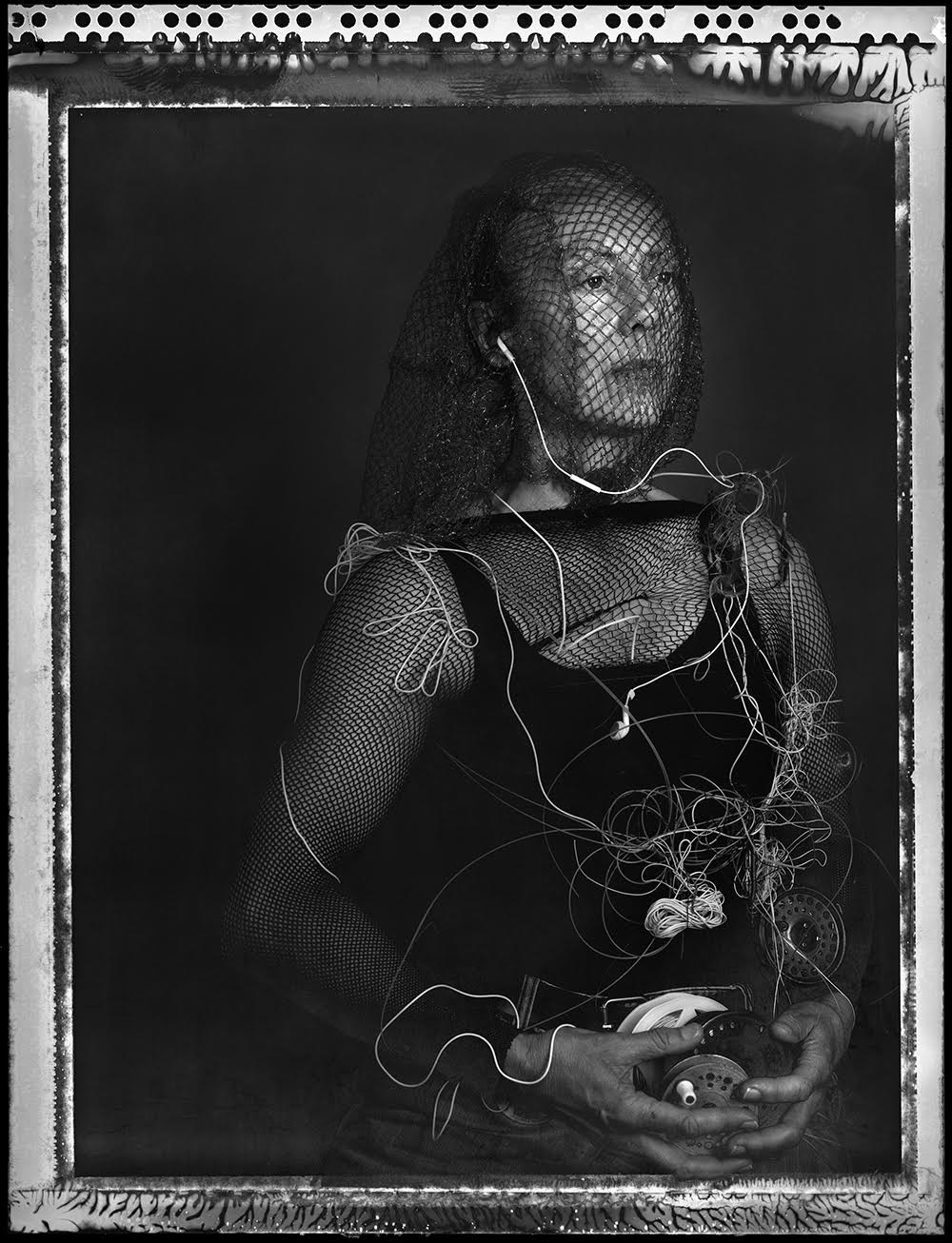 TOO FINE A LINE, 2018 from W(h)arming. © Clare Park. (Shown in Shutter Hub’s Out of the Ordinary exhibition at Bridewell Theatre, London.)

“She has been an uninhibited chronicler of her body and her life, speaking for her own self and beyond that for all women caught in the flux of bodily and emotional change” ‘Life’s Work’ by Mary Powell, Creative Review, 1994.