This is a project using self-portraiture influenced by archival imagery and conversations with my mum, which explores my family history in the wider context of communism in Eastern Europe. 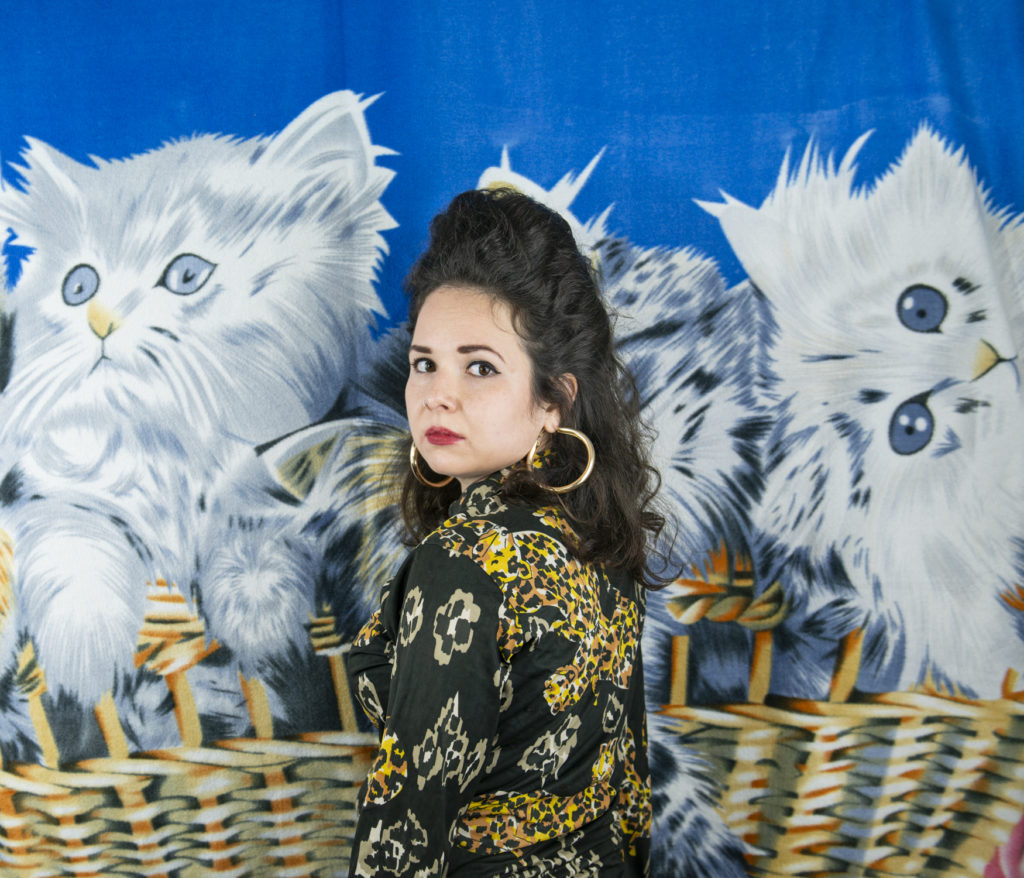 Nylon first entered the Polish fashion market in the 1970s and largely replaced cotton. At the time this material was seen as fashionable, yet difficult to obtain. It was often perceived as sensational and for many people, it symbolised post-war Western modernity and foreign aspirations. In this self-portrait, I wear one of my grandmother’s favourite nylon blouses. People, but particularly women, yearned to wear nylon clothing to demonstrate how in-tune they were with changing fashion trends and went to great lengths to obtain nylon clothing, which was almost impossible to buy in the shops. I created the background using a blanket with images of cats, which my grandparents bought for me as a young child. To this day, cat motifs are frequently seen in Polish homes. 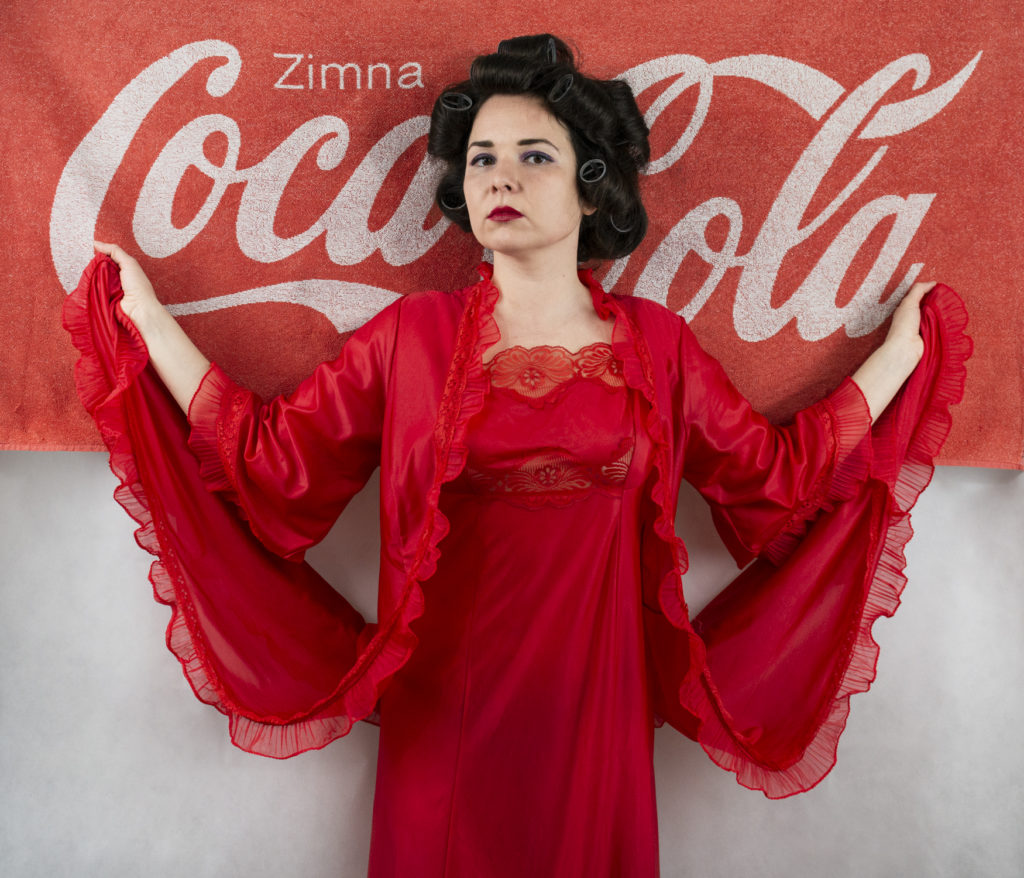 Before the Berlin Wall fell down items associated with capitalism, and what to this day older generations call the “West” were smuggled into Poland. In the early 1990s when such items, like Coca-Cola, entered the market freely, people aspired to have them in their homes. After 1989, such items became “legal” displays of being Western and moving away from the communist past. My family won these red and white towels in a radio competition, the colours resemble the white and red Polish flag, and the text “Zimna” translates into the word “Cold.” I wear my grandma’s favourite nightgown, which she only wore on holiday, and never at home as it was seen as too provocative. 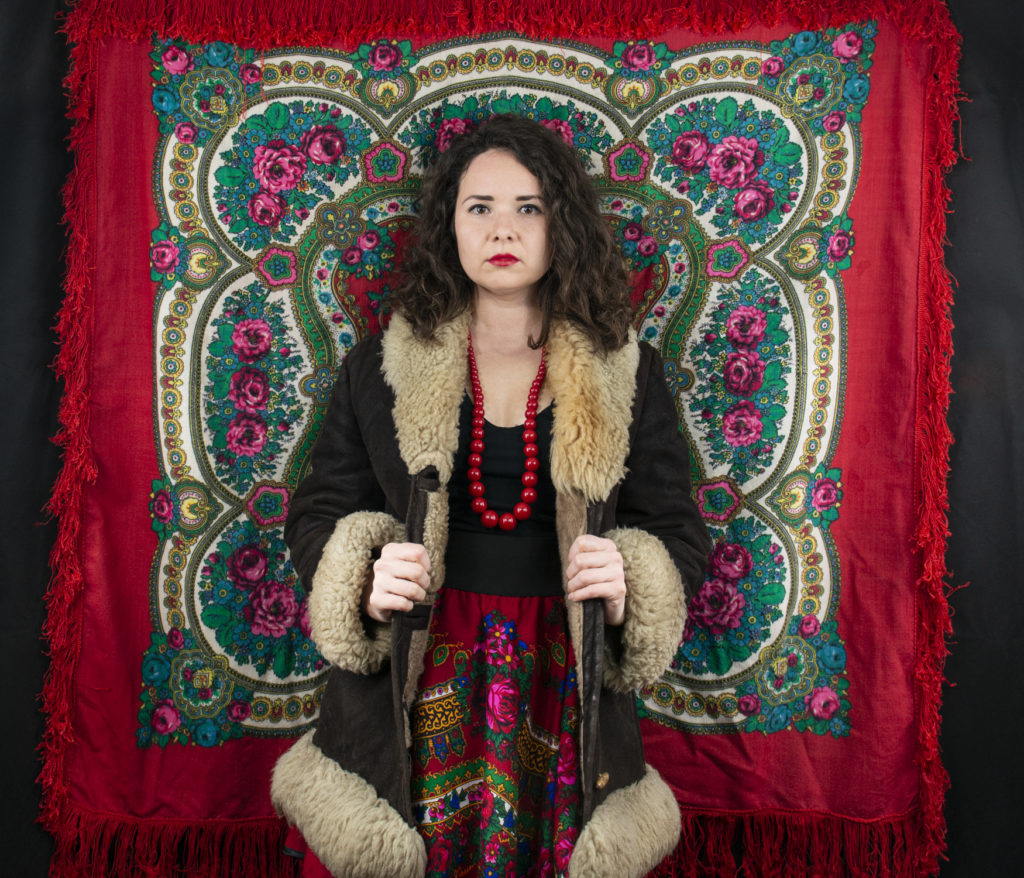 I wear my aunt’s first sheepskin coat, known as “kozuch.” When my aunt was growing up harsh winters were the norm, with temperatures falling way below minus 20 degrees and it was important to own multiple thick coats. It was impossible to buy such coats and often people kept their own animals at home, which they used to make clothing independently, and later consume the meat. There was a profound lack of everything in society at the time, so nothing was wasted. The background is created from a folkloric scarf bought in Poland. Floral motifs and the colour red were popular across Eastern Europe and to this day make up the cultural landscape and are now mass-produced. Traditionally, these scarves were worn by women over their heads, but now these designs have been reinterpreted and appear in contemporary clothing, like the skirt in this image. 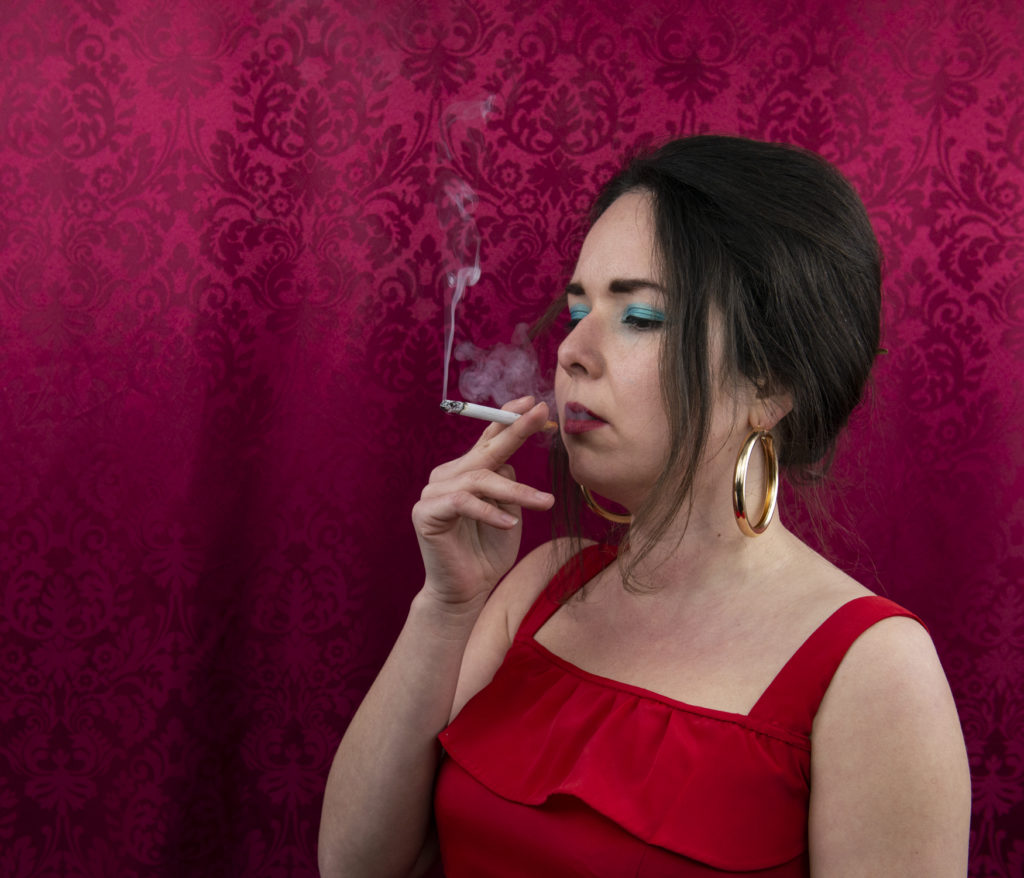 This self-portrait is based on a photo of my grandma pretending to smoke. I wear her cherished top from the 70s, which my mum brought over from Poland with us. My grandma wore this top on holiday and told her friends that it made her feel liberated and feminine. My grandma loved wearing the colour red, but did not wear this top, or smoke in front of her children. My mum was surprised when she saw a photo of her mother pretending to smoke, as cigarettes were seen as unfeminine and harsh. Smoking was an activity that was largely reserved for men and it was shocking to see women smoke. I did my hair and makeup in the way that my grandma used to, using her favourite shade of blue for the eyeshadow. For the background, I use my mum’s Christmas tablecloth which has been in our family for many years and is only used for special occasions. 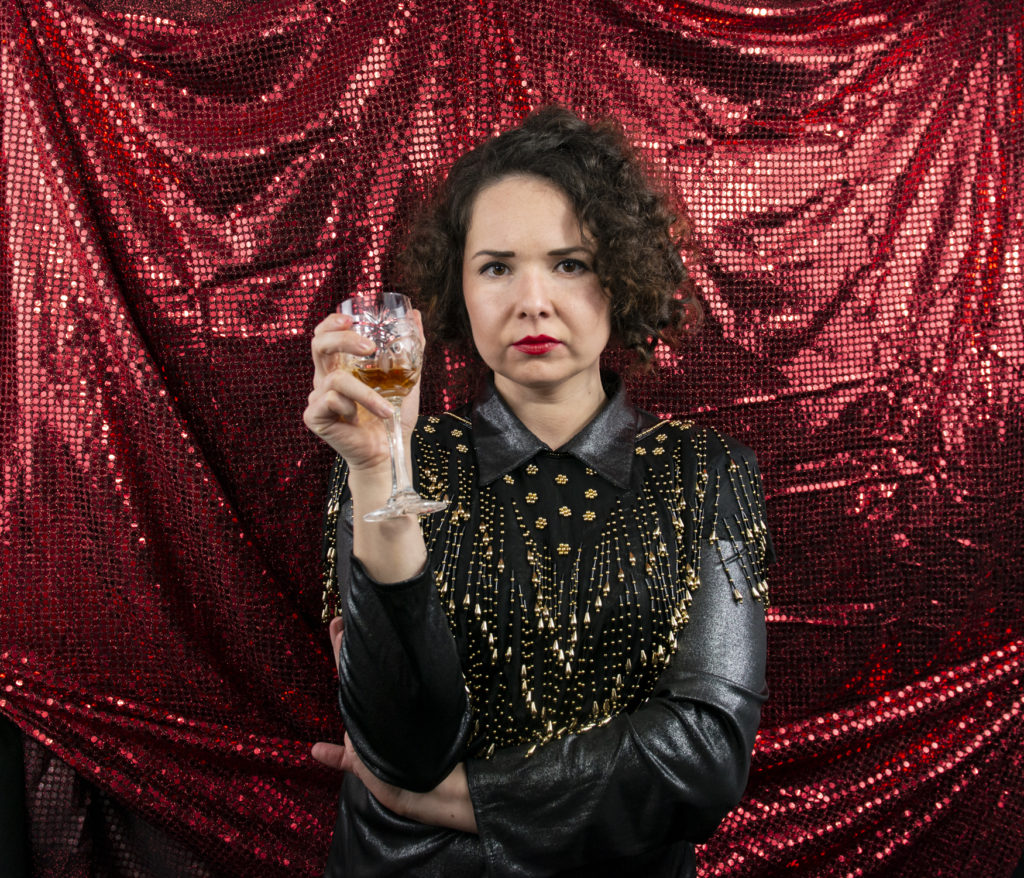 New Year’s Eve is one of the most celebrated days in Poland, and for my grandma and mum, it was an occasion to get dressed up. In this self-portrait, I wear what was referred to as the Nefertiti Collar. This collar belonged to my grandma, which she bought from an independent seller from Thailand. I used a red sequin material, which my dad used to sell in his clothes shop in Poland in the 90s, and in my hand, I hold a crystal glass, which was part of my mum’s dowry. My grandparents bought crystal from local sellers, or smuggled it from other Eastern European countries, to create a dowry for their daughters. During Communism in Poland cash was worthless due to extreme inflation and people often invested in crystal, which was later passed down through the generations. It was also common for people to have their own crystal productions in gardens and sell such items, this glass was bought from my neighbours in Poland. 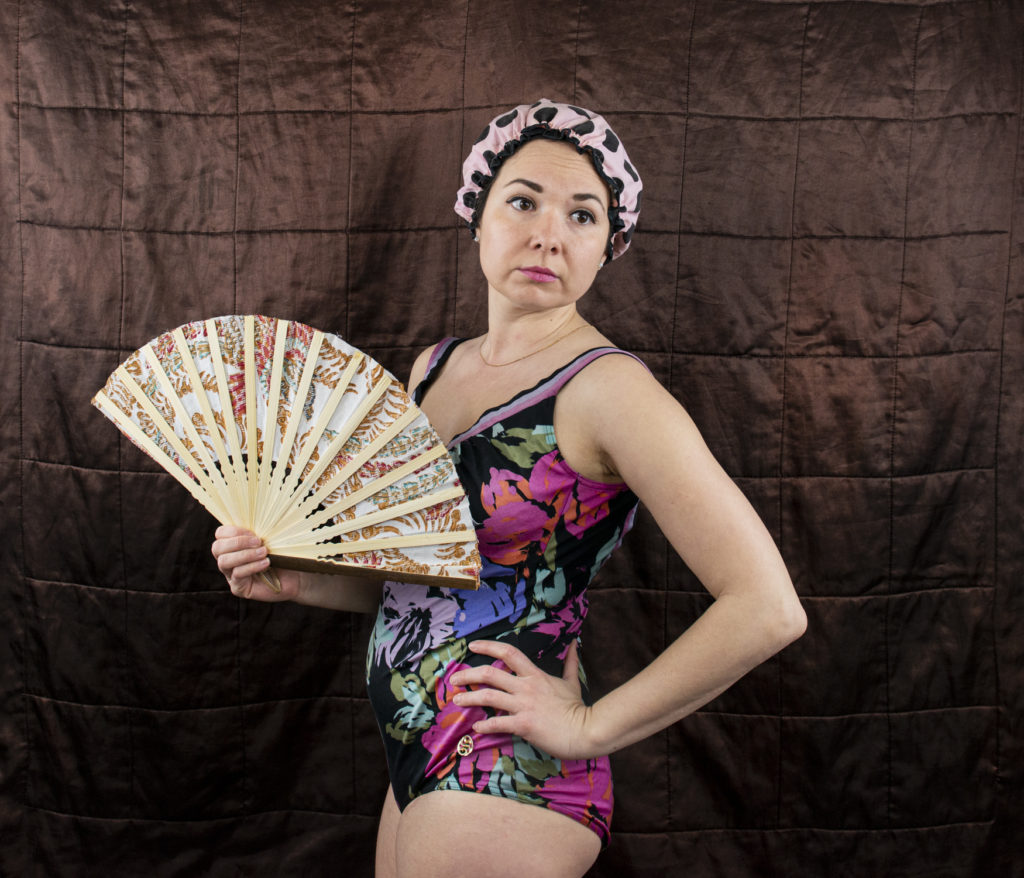 During Communism, it was the norm for families to go on state-funded holidays, often to health spas, known as sanatoria. Sanatoria were constructed across the Soviet bloc as part of the communist propaganda, which promoted leisure and wellbeing. Every year my grandparents and other family members prepared extensively for such trips. In this photo, I wear my grandma’s cherished swimming suit, that she wore to sanatoria treatments, which my mum had kept over the years. My grandma didn’t know how to swim until her 60s, so she bought this outfit with the state holidays in mind. For the background, I use a birthday blanket I received as a child. 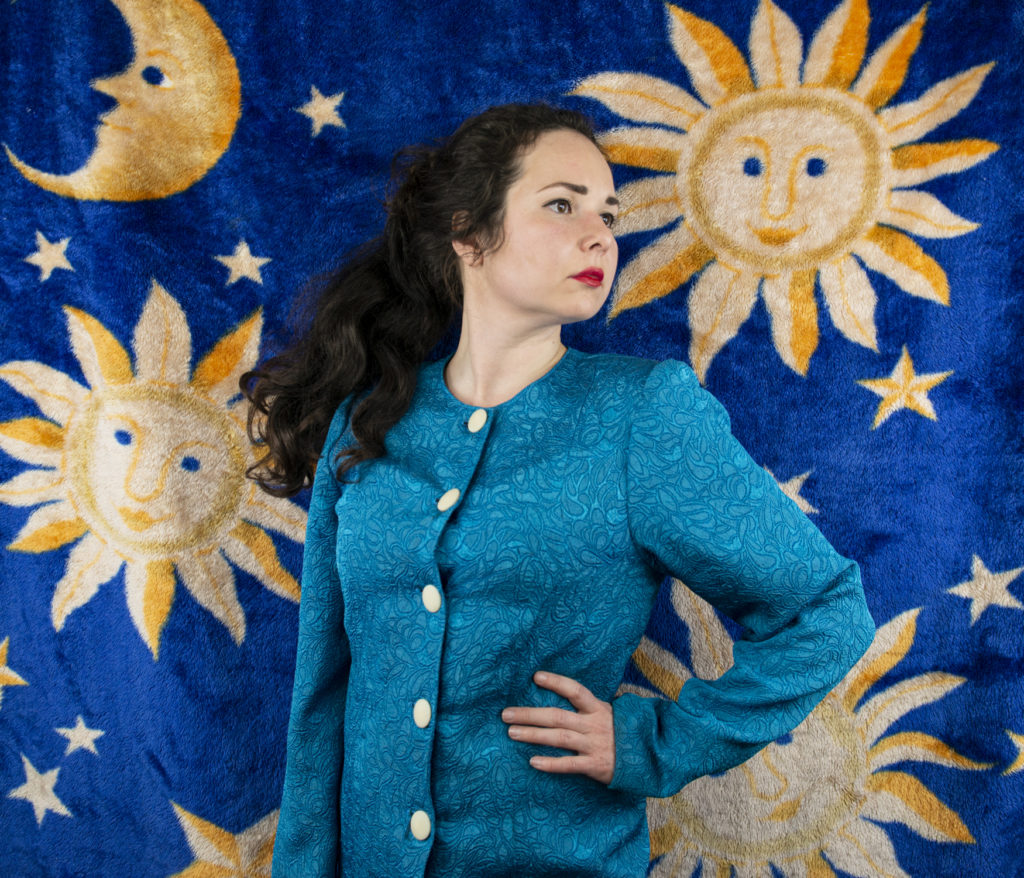 I wear my mum’s favourite suit, known as a “kostium.” To get an outfit made by a local seamstress in the 80s, people had to buy the fabric, zips and buttons separately, and later attend multiple “try on” sessions. During my mum’s youth going to the seamstress to have your measurements taken was often a “girls’ day out.” Female friends would get together to visit their favourite seamstress and spend hours together trying on different combinations of material and designs. My mum had this outfit made when she first started working as a teacher in the local secondary school. The matching top and skirt were considered professional and highly respectable. My mum had many similar outfits made for different days of the week at work. For the background, I used my sister’s special birthday blanket she received as a child. 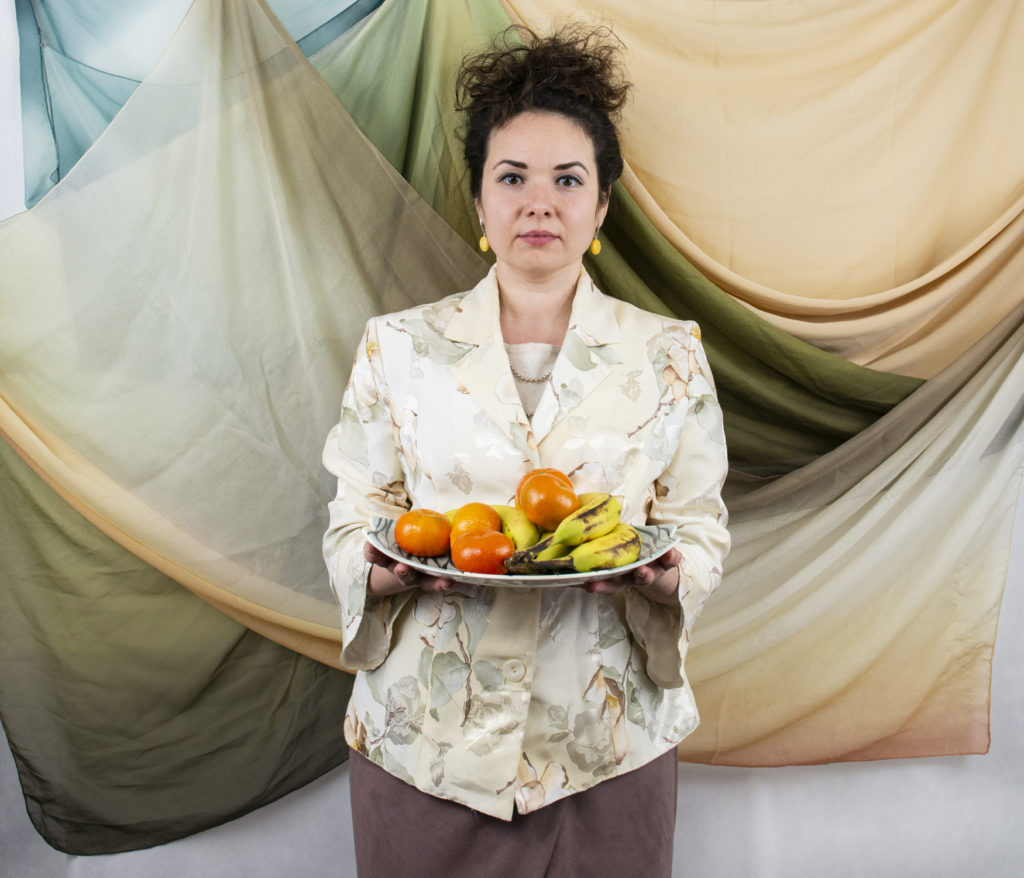 My mum told me of the excitement in the 1990s when the Berlin Wall fell and it became possible to buy bananas, an item which most Polish people only saw on TV, if they were fortunate enough to have one. She distinctly remembers seeing non-European food for the first time and how “Western” it made her feel as a young adult. I use oranges and bananas, now wildly accessible and often eaten at home, and hold my grandma’s fruit platter and wear her favourite Sunday outfit, which she often wore to Church. The background is made up of different neck scarves, which in Polish have a distinct term: “apaszkI.” Women in my family-owned multiple neck scarves for every occasion and I used them to create this background collage. 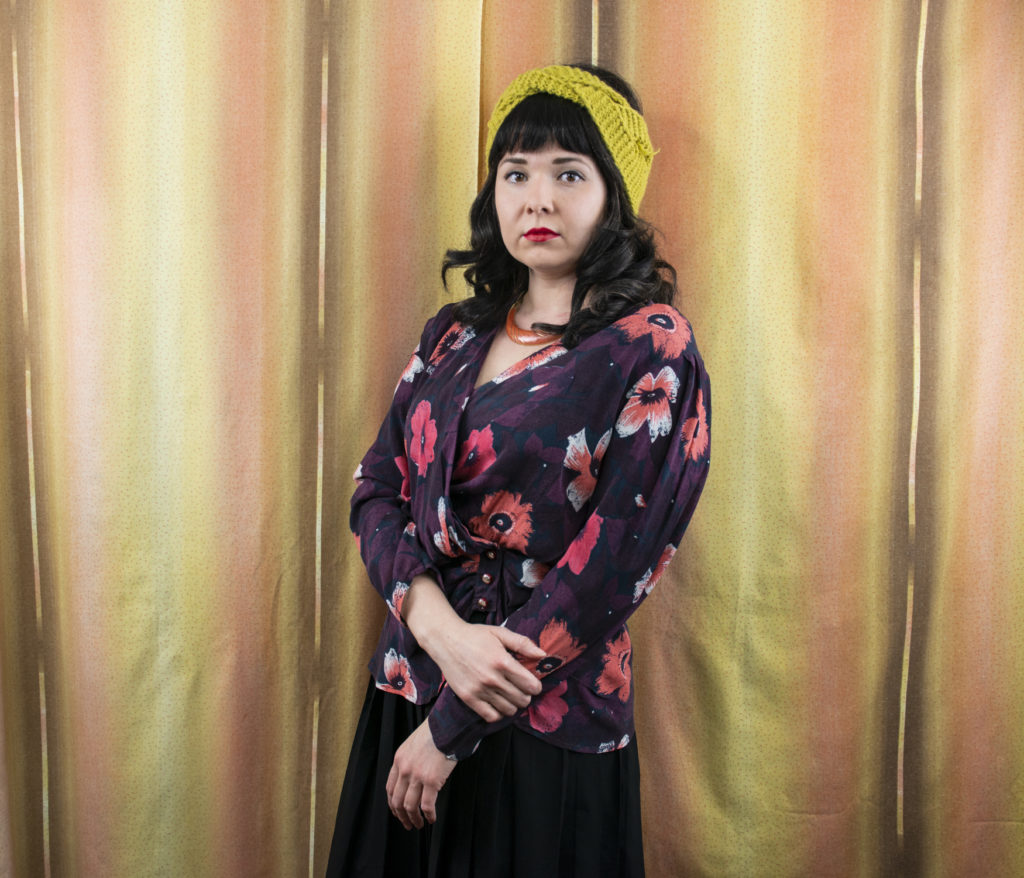 Due to severe shortages and widespread lack of sundry items during Communism, it was normal for families to go on “trading holidays”. It was the custom in my family to go to other Communist countries during the 60s-80s to trade and barter items such as coffee, foreign currency, or jewellery, for clothes, fabric or household appliances that could not be easily obtained in Poland. Such trips required extensive planning and crossing multiple borders between other Soviet bloc countries and Yugoslavia. Being caught at the border with items that were forbidden during communism, such as American Dollars, had severe consequences. I wear one of my grandma’s favourite tops, which was a product of an extensive barter journey through Bulgaria, Romania and Russia, with various materials being smuggled into Poland and later made into outfits. The background is created from my mum’s kitchen curtains that she had made when she moved out for her parents’ house after she got married. 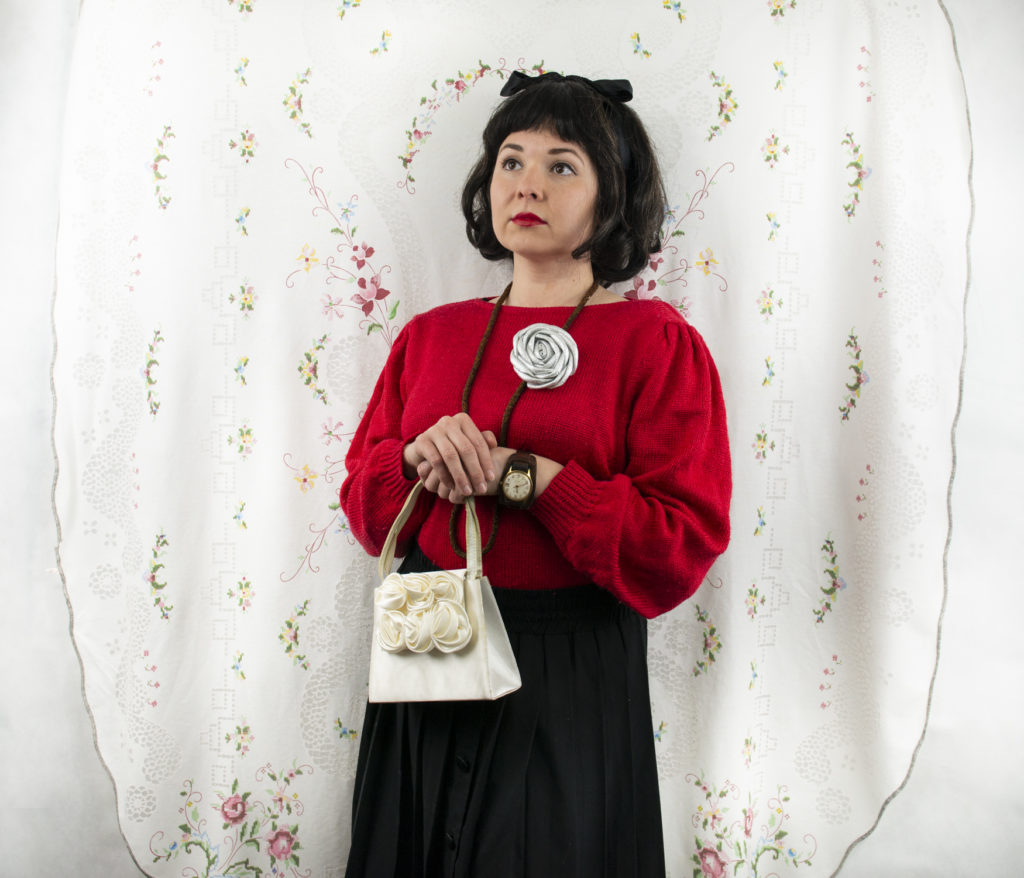 Since Poland is a very Catholic country, Easter is one of the most important days in the calendar, which is celebrated by taking an egg basket to church. Nevertheless, during the Communist regime Catholicism was largely suppressed and replaced by the Russian Orthodox Church, with Catholic celebrations being pushed underground. It was risky for Polish people under Communism to attend mass, or celebrate weddings, baptisms, or other religious holidays. In this photo, I use a traditional Easter tablecloth visible in the background. I also wear my mum’s jumper, which she wore as a young adult, replicating her hair and pose from family photos. 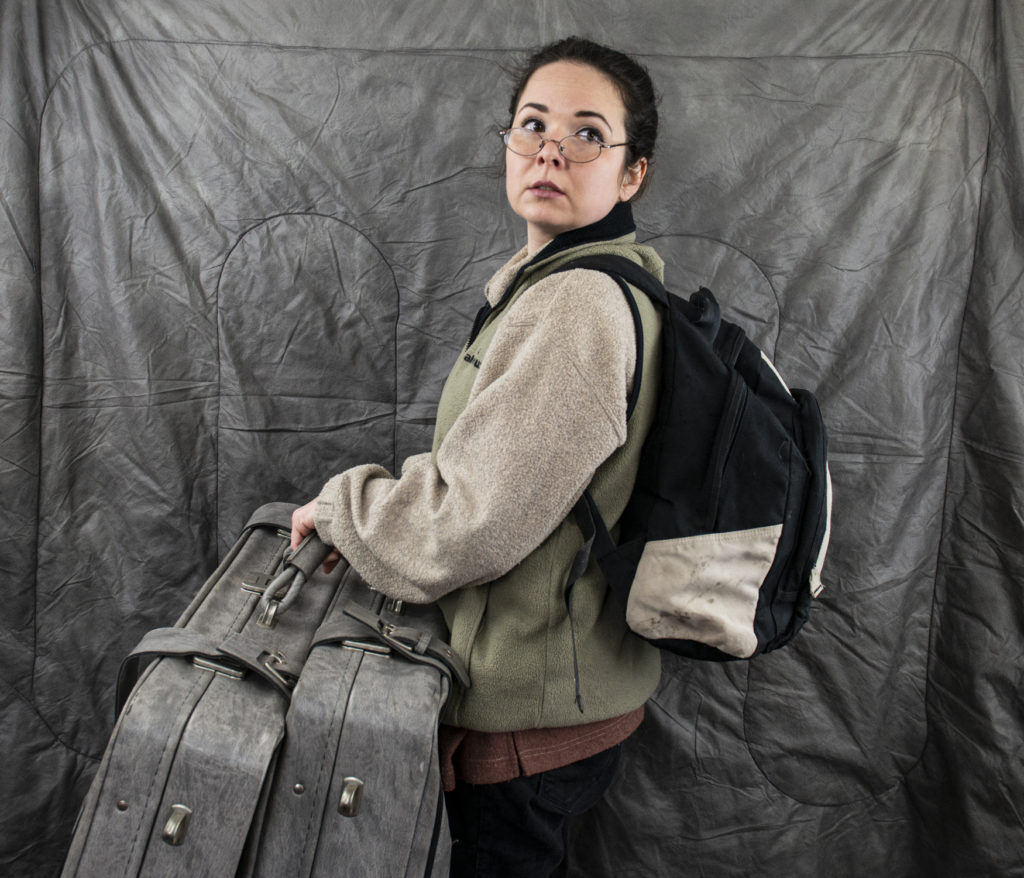 My mum moved to the UK in 2000 before Poland was part of the European Union. For many months ahead of her move, the whole family saved to help her to buy her coach ticket to London. At the time catching a plane was completely unaffordable so travelling by coach was the only option. These are the clothes which she bought purposely for the coach journey from Katowice (Poland) to London Victoria. She wore this very backpack and carried the two suitcases, transporting her life over from one country to the next. For the background, I use an old sleeping bag, which was one of the first items my mum bought in the UK after she arrived. 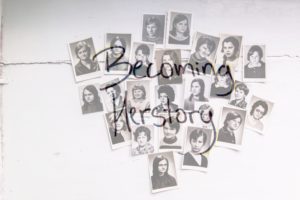 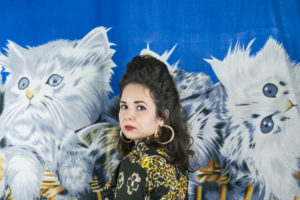 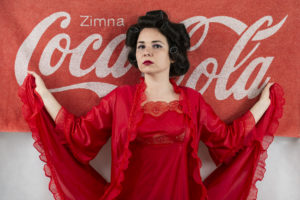 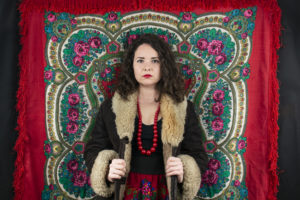 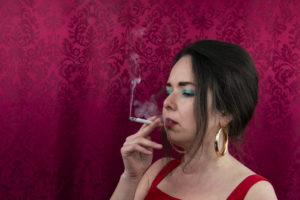 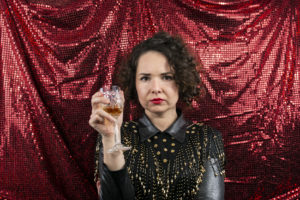 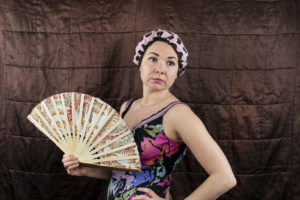 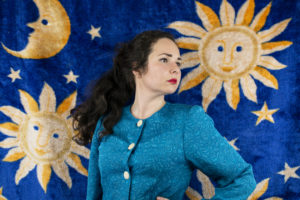 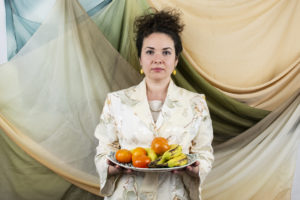 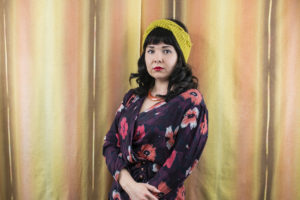 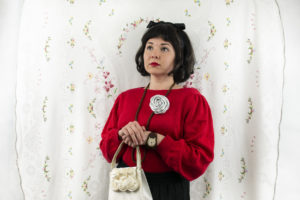 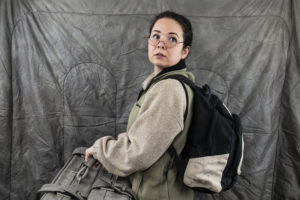 Zula is a Polish photographer and videographer based between London and Kraków.

Zula was born in Poland, grew up in the UK and has worked in France, China, South Africa, India, Palestine and the Caribbean. Her practice is influenced by her own experience of immigration and in her work, she explores themes of national identity, displacement and belonging.

Zula has always been interested in storytelling and she has obtained a BA in English Literature in French and an MRes in Postcolonial French literature from the University of Warwick.

Studying literature and stories of others has inspired Zula to turn the lens on herself. In 2019 Zula has obtained an MA in Photojournalism and Documentary Photography from London College of Communication, and since then she has been largely focusing on her own journey of migration and the meaning of home.

In her practice, Zula often works with multimedia, film and digital and analogue photography, and incorporates archival images and documents to challenge conventional visual story-telling norms.   Zula’s work has been exhibited and published internationally. She has won the AOP Emerging Talent Award and the PDN Edu Award in 2020, and is a recipient of the MEAD Fellowship Grant, which has enabled her to document contemporary female identity in Eastern Europe.

Zula’s images have been featured by numerous publications such as the BBC, The Guardian, The Calvert Journal, The Culture Trip, Reckless Magazine, South West Collective, Photograd, She’s Got Wonder, Saigoneer, Café Babel, Stories from Poland, The First News, Coolura24, and Londynek.net. Zula also works as a freelance photographer in London and Kraków (Poland).

In May 2020 Zula co-founded the Red Zenith Collective, a platform for womxn and non-binary creatives from Central and Eastern Europe.