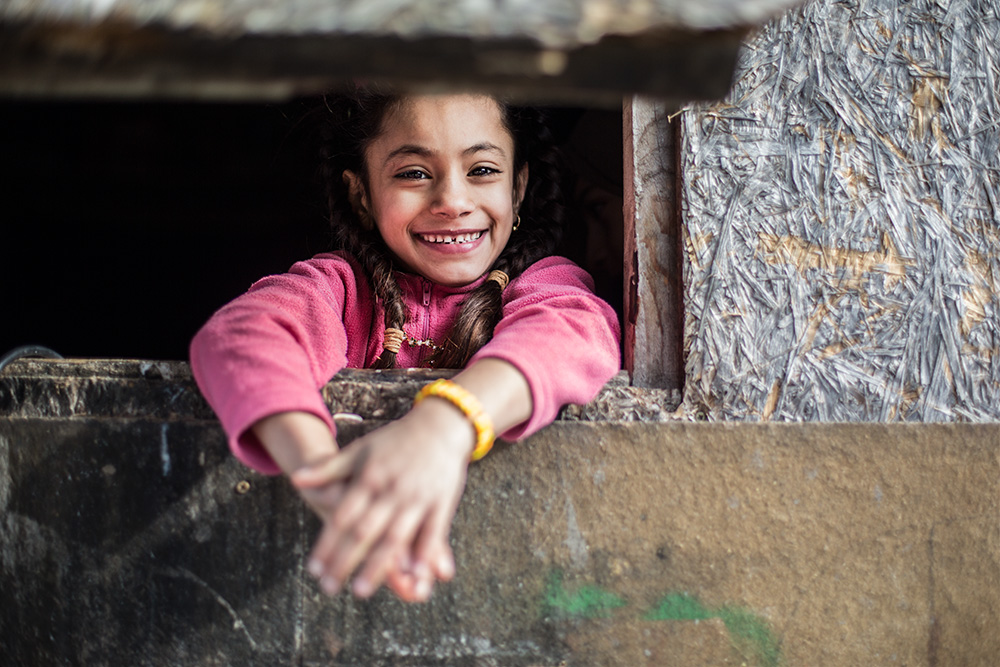 Anna Kressler, a second year BA (Hons) Photography student from Germany, has landed the Eaton Portrait Prize for “Sterrin”, her photograph of a young girl living in a refugee camp in the Dunkirk suburb of Grande-Synthe.

The award, which is generously sponsored by former Anglia Ruskin Photography student Andy Eaton, comes with the first prize of a MacBook Air.  An exhibition of the shortlisted work is on display outside the Mumford Theatre on the Cambridge campus until Mid May.

The Sustainability Art Prize, sponsored by Anglia Ruskin’s Cambridge School of Art and Global Sustainability Institute, has been awarded, along with a cheque for £300, to an MA Fine Art student who works under the pseudonym Artists Activists.

Artists Activists’ “Scar Tissue” is a collage of tiny satellite images.  These include evidence of bombing in the Syrian city of Aleppo, which was visible on publically-available European Space Agency images but hadn’t been reported by the media.

Third place in the Sustainability Art Prize has gone to Justyna Latoch, a BA (Hons) Fine Art student, for her film and costume “Nowhere, or not quite here yet, until now…as long as it takes”, inspired by her experiences volunteering at a refugee camp in Calais.

Second place was awarded to MA Printmaking student Vic Dawson for “The Imagined Past and the Forgotten Future – An Archive for Orford Ness,” and Vic was also a runner-up in the Searle Award for Creativity.

The Searle Award was started in 2007 by Ronald Searle, one of Anglia Ruskin’s most celebrated alumni, and is awarded to the student who submits the most imaginative sketchbook.

This year’s first place, a cheque for £500 and an original Ronald Searle Lithograph has gone to MA Children’s Book Illustration student Sam Boughton from Exeter, for her sketches of some of Cambridge’s most iconic buildings.

“The Searle Award and the Sustainability Art Prize are open to students from all courses in the Cambridge School of Art, and it is wonderful to see students from different disciplines not only producing very high quality work but also tackling some of the crucial issues of our times – the environment, migration, and the effects of warfare.

“There is some exceptionally strong work on display this year, including many excellent pieces that missed out on winning awards.”

Both the Sustainability Art Prize and the Searle Award for Creativity are on display in the Ruskin Gallery until Saturday, 23 April.

Entry is free and the Ruskin Gallery is open Monday-Saturday, 10am-4.30pm.