Caroline at the Back Door © Anneleen Lindsay

We’re delighted to hear that Shutter Hub members Anneleen Lindsay, Sacha Brisdion and Ilisa Stack have been shortlisted for the Portrait of Britain Award 2018!

Both images feature in the first ever Portrait of Britain book, published by Hoxton Mini Press, which features the 200 images which were shortlisted from 13,000 entries.

Anneleen Lindsay is a professional freelance photographer, based in Edinburgh and working throughout the UK. Her photography focuses on creative storytelling portraiture, wild landscapes and the interplay between people and their environments. Her work explores the timeless quality and endurance of nature and themes of solitude, feminism, representations of femininity, psychogeography, the natural environment and land usage. The Romantic poets and Gothic literature of the Victorian era and the paintings of the Pre-Raphaelite movement influence her approach and aesthetic, which uses rich colours and spiritual and emotional symbolism. She photographs both real and imagined relationships between individuals and nature, often using locations, props and styling to conjure scenes, inviting the viewer to project a story or character on to the subject.

Her Portrait of Britain 2018 shortlisted image, Caroline at the Back Door, was taken at the doorway to the stairwell of the block of flats where she lives. She says:

“It was a spontaneous shot, taken on the way to the planned location for a fashion shoot. On our way out, I noticed that the colour of the top Caroline was wearing perfectly matched the exterior walls of the building and I liked the incongruity of her outfit next to the recycling bins and the bike belonging to my toddler neighbour. I thought it was funny, so snapped this quite quickly; though I did pause to compose it carefully, using the striped paintwork as a frame and including the lace curtained windows which complement her net skirt. I took several other frames within a few minutes of this which were much closer up and are very different pictures (one of them, ‘The Lady of Shalott’, was a runner up in the Julia Margaret Cameron Awards, and is also currently showing in Shutter Hub exhibition Because We Can); these are moodier and focused on Caroline’s face and the corresponding face on her t-shirt. Flitting back and forth between moods and stories within minutes is part of why I love photography; I enjoy having a plan and then abandoning it to go off on a tangent when another possible story catches my eye!”

Sacha Brisdion is a recent graduate from Manchester School of Art (2017). Her practice revolves around her personal relationships with her sitters, often being female dominated. She has a desire to understand the different dynamics we as females naturally have. Sacha has questioned areas such as the importance of the ‘Gaze’, femininity, youth and closeness.

Sacha’s photo, Nan, was taken as part of a bigger series in which Sacha documented her relationship with her grandparents. She says:

“The August before I took a snapshot style image of my nan getting dressed and I loved the expression in that photograph. I took that piece back to university in the autumn, I revisited several times and thought about the relationship my nan has with her body, the memories I have of her walking around naked, very comfortable in her maturing skin. In turn I realised how this impacted on my relationship with my body image. I wanted to create a quiet/reflective piece, a ‘staged’ portrait, to convey her beauty, and give an older lady the leading light so to speak. And also thank her for giving me a little body confidence.” 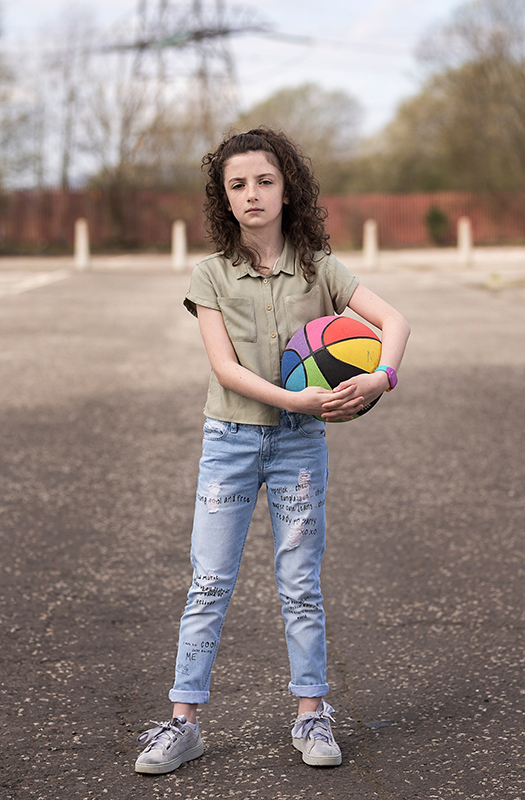 Ilisa Stack was born in Rutherglen in Central Scotland in 1979. Ilisa always had a love and desire for photography from her days as a little girl who used to watch her dad developing film in the darkroom to taking everyday snap shots of her own family, however it was not until 2014 when Ilisa was accepted on to the Hnd Photography course at City of Glasgow College that her photography exploration really began. Ilisa completed her Hnd and went on to study for the BA (Hons) Degree in which she recently graduated from in June of 2018 obtaining a 1st class honours degree in photography as well as acquiring the winning award for the Art Foundation Medallion of Excellence for outstanding achievements in the Creative Industries.

The four years studying at City of Glasgow College aided her photographic skill set tremendously and with her approach to all the given briefs Ilisa could start to see the Social documentary and portrait path that her photography was leading towards.

Ilisa’s work lends itself to Contemporary Art and focuses on creating pictorial social documents with the aim for archival collections.Ilisa has a reputation for sensitivity to her subjects, and for seeing beyond what is immediately apparent in a situation in order to tell a deeper and more personal visual story. Ilisa’s personal projects typically explore themes of, community and social issues. Ilisa has thrived in teaching photography at workshops for a local mission as well as youth groups. She says:

“Over the last two years I have created my ongoing photo series ‘Oot tae Play’ which focuses on Glasgow children and outside play,creating a social document around specific post code areas. Each child brings their toy and so with them gives a glimpse of the context of current toy trends. As fewer children now venture out far from their home this type of project is harder to achieve, but is an important document topresent a history of today’s children beyond their digital or online family albums. This series has developed quite considerably outlining an immense shift in social change concerning the current and future photographic documentation of children, environment and outside play.“

The 100 winning photographers will be announced on 30th August, and the Portrait of Britain exhibition will open on 1 September 2018 on JCDecaux screens nationwide – on bus stops, high streets and in train stations, as part of the biggest exhibition of contemporary portraiture ever held.