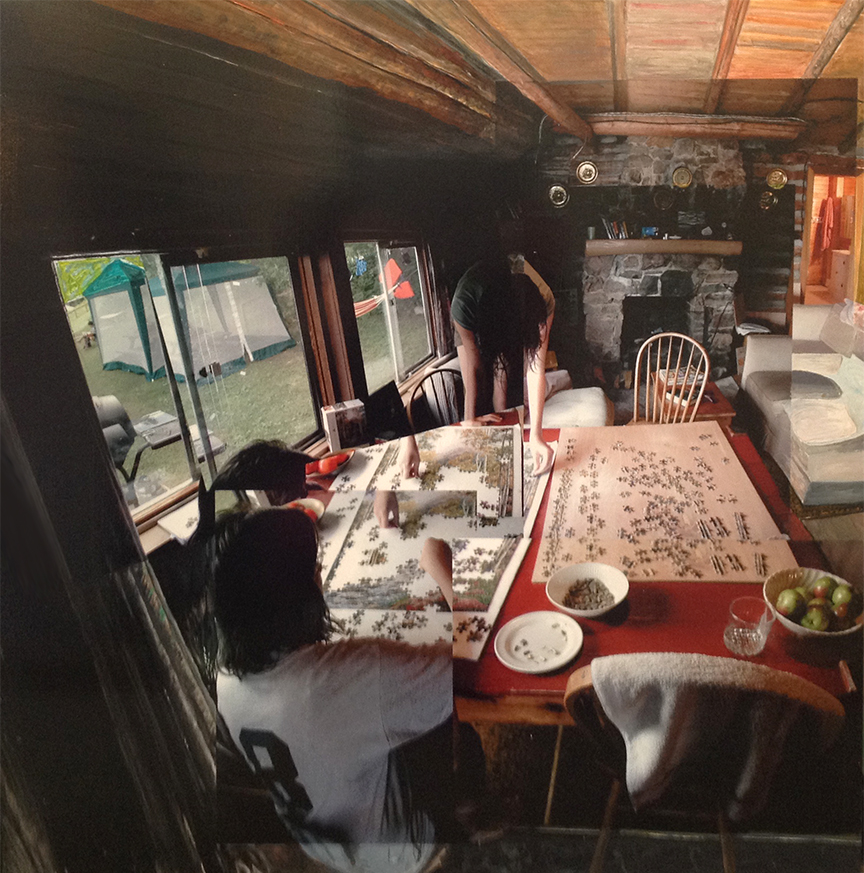 Regular Shutter Hub contributor Taymaz Valley recently got in touch after visiting an exhibition of Don Monet's work in Canada. We found the work, and Taymaz's thoughts on it, fascinating, so here's Taymaz sharing his opinion on the work of Don Monet and synergy of the arts…

Technology and the arts have had a bittersweet relationship since their development and onset into modernity. They have been feeding off each other whilst being critical of one another nevertheless. With the invention of synthetic paintbrushes, and chemical reactions that gave us Ivory and Lamp Black, giving grave-robbers a break and allowing the funeral homes and cemetery groundkeepers to breathe a collective sigh of relief, painting was revolutionized by technology. And, may I say painting was improved, because what was once an arduous and expensive task of producing coloured oils, was now done cheaply with greater availability and choice.

The projection of an image onto a wall was done by creating a hole in the opposite wall and sketching the upside-down image. Projectors are used today to reflect an image onto a canvas, and the digital technology has even made frescos much more accessible. Similarly the very first camera with a lens, which was camera obscura, came into use during the late 16th century, and allowed artists to play around with the perspectives. Vermeer famously used a camera obscura, and that allowed him to produce such magnificent paintings that we are still flocking into museums to see the rare examples of them. Pioneer of real photorealism in art perhaps? Moving from camera obscura to the early 19th century and with the invention of daguerreotypes by Louis Daguerre, the means to capture an image onto a surface, using light, camera and chemicals became a reality. Photography was born out science and technology, and make no mistakes, it was aspiring to be artistic and was seen on par with painting since the beginning. It was only when photography became so playful and user friendly that the fine arts panicked and deemed photography to be the other in fear of becoming obsolete.

Yet, I do not think painting, print and drawing have anything to fear, because photography is just an extension of the artist’s vision, adding much needed value to the arts. Pictorialism is a force to be reckoned with, even today, and modern photography has a lot to learn from history of art, and all the perspectives that it brings. Nonetheless, the attacks on photography as “not-real-art” still are prevalent in the scene, and even well respected, seasoned critics like The Guardian’s Jonathan Jones have decided to label photography as inferior art. I think it is time for a change in tactics, and I think photography must be brought to the table as a genuine addition to the arts, rather than an alternative, substandard melange of technology and art.

With these thoughts roaming around my head, I came across Don Monet’s work online and then visiting his gallery. Mr Monet, artist, activist and proprietor of The Cube Gallery in Ottawa, is pursuing an exceedingly interesting style of photo collage, mixed with a postmodern take on the art of fractured images. He is bending space time in his work, and the results are beguiling. Each piece contains a number of photographs, taken at different instances, with different exposures and viewpoints, and these photographs do not seek to prove that they belong to a set, or indeed are part of a particular scene. They are taken purposefully self-aware, and then placed on flat boards, and extended using paint. The result, some included in this article, are a mixture of painting and photography, coexisting to bring together warped and splintered images. And, isn’t that how our minds work? We capture thousands of images per second with our eyes, and our brain links them together within a time frame. However, they are never like a perfect image, rather our memories of different scenes (because it is impossible to be truly in the present using our eyes, and the links from our eyes to brain functions) are fractured and distorted in order to produce a feeling, a unique take on the situation. These memories are just like Mr Monet’s work. We are being presented with distortions, because our interpretations are the facades. We deceive ourselves all the time, and fail to truly appreciate the universe in all its collective and connective beauty.

At times, Don Monet includes a leg, a foot, a hand or traces and shadows within his work, which are then extended using paint, and you cannot help but see them as extensions of your own body and position. You are no longer just the bystander, just a gazing viewer, you become involved and become part of the scene. Just like being synergetic when it comes to photography, Mr Monet’s work includes the viewer as an integral part of the piece. In a world where photography is being viewed by detached individuals swiping left and right to choose a fantasy, isn’t it refreshing to be immersed within a work of art that preaches harmony and practices inclusion?

Whether the critics like it or not, photography is an art form, and belongs up there with all the other arts. Technology has always played a role in the arts, and photography has not gone so far as to erase the eyes of the artist and indeed the beholder. Photography is just a fresh way of looking at the world, and we can allow other arts join in the fun. I urge the good reader to head online and see Don Monet’s work, and if you get a chance to visit Ottawa, head down to The Cube Gallery to see his work up close. His exhibition “The Fractured Cottage” at South of 60 Gallery, Old Railway Station Barry’s Bay Ontario Canada, will also be held June 16 to July 23, 2017.